on May 20, 2014
Ice-cream is such a thing, that everyone loves, may it be the child, the teenager, the grownup person or an old person. Everyone loves to enjoy and have a scoop or two of ice-cream every now and then, may it be with their loved ones, or alone.

The invention of ice-cream was such a great thing in my opinion, coz it is one of the best ways to beat the heat, keep yourself calmed down and everyone likes to pamper themselves once in a while.

One fine evening I was called at an ice-cream parlor in Bandra, Carter Road, known as Hokey Pokey, honestly speaking, one of the best parlors serving ice-creams.
The concept the parlor uses is a cold stone preparation, in which, the ice-cream scoop is put on a cold granite stone which is temperature controlled, then the person behind the stone, put in the topping requested and mixes well with the ice-cream to take the simple ice-cream to a whole new level. 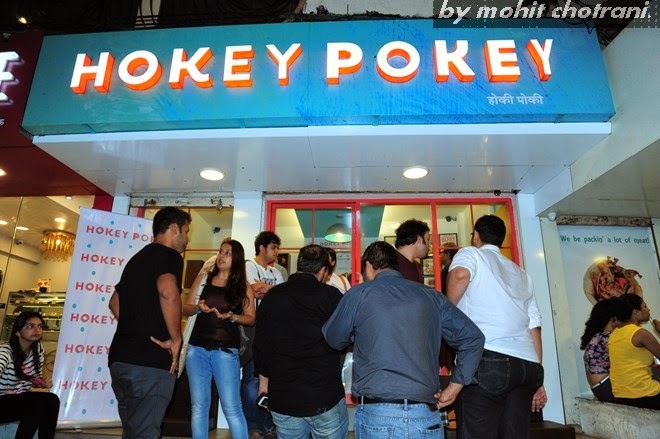 The concept of the cold stone is adapted from the States, and Hokey Pokey is I guess the only parlor in India having such a concept for ice-creams.

Soon the invited Food Bloggers and the founder of FBAI - Food Bloggers Association India - Sameer Malkani, started arriving and gathered outside the shop and got engaged into talking to each other.
There was jokes been cracked, the atmosphere was very jolly and everyone was in a very happy mood, had a big smile on their face, we all were welcome by the PR incharge Rhea.
The owner of Hokey Pokey - Rohan came and we all started talking to him and chilling out.

We all went inside and then we all were sampling some of their creations and were show how the ice cream is made, how to mix the additional flavorings. Some of their best selling creations were, The Knight & Armour, The Chocolate Therapy, another one was the Very Very Berry.
While the people behind the stone were making this, we all were eager to see how it is actually done, and how quick they are.
And how can we not eat their season special, as the king of fruits, Mango is in the season,

We all dint stop at just these flavors, and wanted to try others as well and then they all came one by one, and there were almost 6-7 mini tubs given to us which people found less, as there is no age for eating ice-cream.

Then it was Rohan's turn to make the ice-cream for us and tell us about the company, how it started, what made him do this, what are the business plans.
He also told us, how the ice creams are made, what is the secret to obtain the richness, the smooth texture and the amazing flavor of the ice-cream.

He also told, how did it all start, with the conversation we came to know that there are also tubs of 500ml sold in supermarkets.

With this, we all got a surprise, we were told that we were divided into teams of 4 and had to go behind the stone and make 3 creations each.
At first, i was like, why always there a competition or something like that. 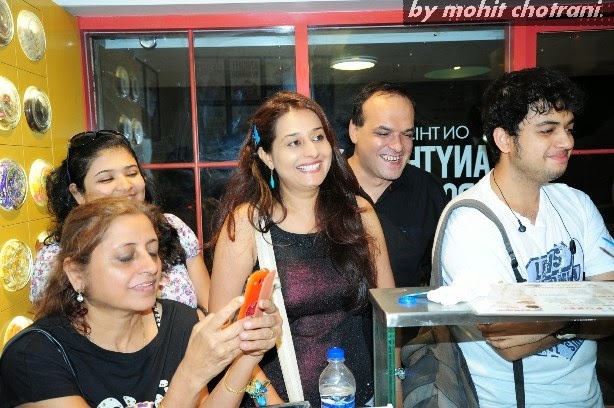 Then all took up the challenge, we were also told, that the best creation made by the teams will be put up on their Hall Of Fame and their menu.
And the winning team will win coupons with a months validity which can be exchanged for a free signature creation at any of the hokey pokey branches.

Before the competition started, Rohan revealed some mystery ingredients which they were going to launch soon, like peanut brittle, honeycomb, indian sweets like rasgulla, gulab jamun and more.

Teams were made, all got busy in deciding what to make, and the first team went behind the counter and began making. It was pretty exciting and fun to see them make it and trying hard to win.
It was good to see them come up with different ideas and flavors. 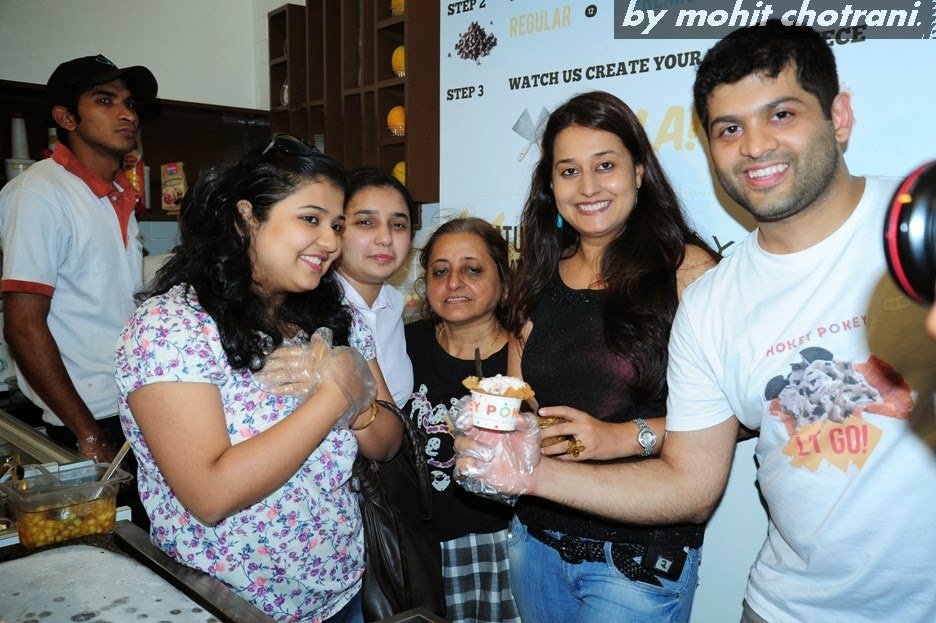 Team 1 was done, and it was time for Rohan to taste the creations and grade them on the basis of taste, innovation and use to flavors and toppings.

Then the second team went, and while they were at their making, there was a team in the corner of the shop which had, Jahan Bloch, Bhisham Mansukhani, Anu Menon, AB and Me who were busy brainstorming and deciding on what to make. We tried almost tasting all the flavors one after the other.
We all came up with different, different ideas like, coffee and mango, mango and chocolate etc etc.
What flavors to use in the creations was our main concern and after everyone's decision, we all decided on 3 flavors, Mango, Coffee & Chocolate chip with Strawberry. 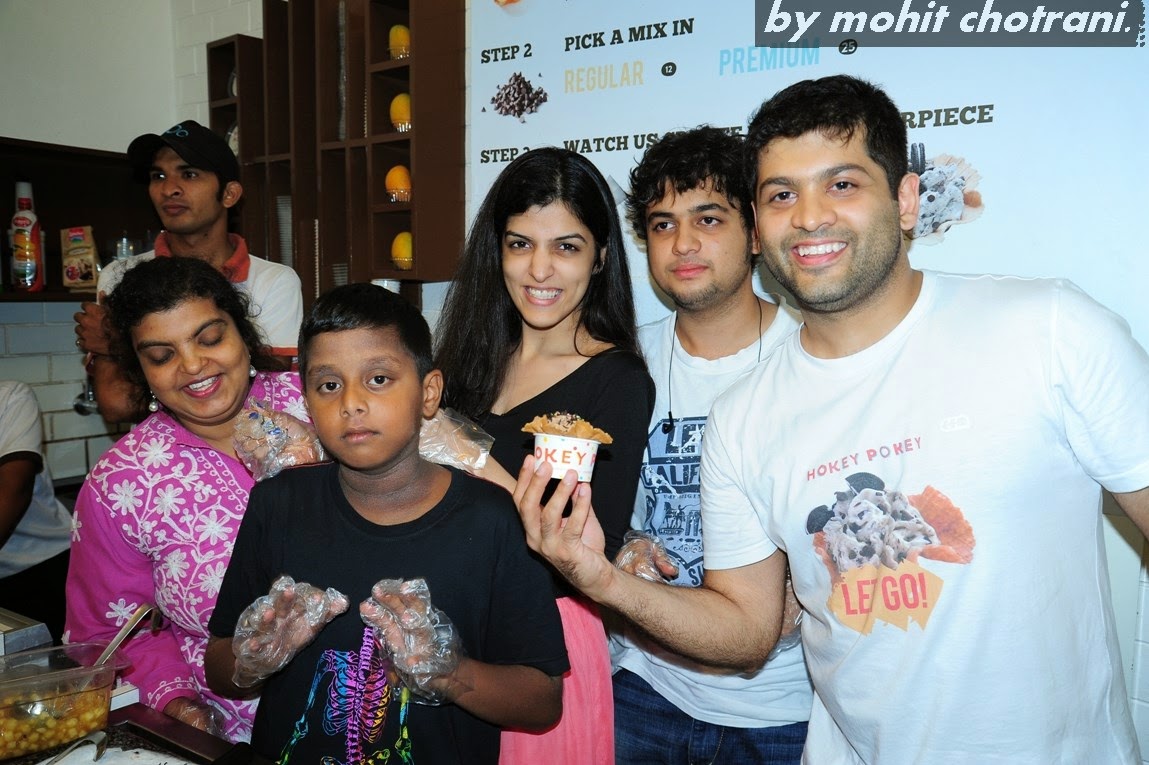 While the brainstorming was going on, there was Team 2 already done with their creations and Rohan was tasting them along with the team as well.


Now it was turn where we had to step behind the counter and make the creations and show everyone the talent which was hidden inside all of us.
We started making the 1st creation, which had Fresh Cream, Roasted Almonds and Mango Ice-Cream which was then finished with fresh chopped Mangoes.
This creations was named 'Aam Aadmi', the reason being the the fruit Mango - Aam.


While the tasting of the 1st creation was going on, the team started with the second creation.
We took the Coffee Ice-Cream and started thinking what to mix along with it to obtain the wining creation.
The secret ingredient comes out, the honeycomb which was one of the new ingredients and it was a must to use in some creation.
Along with the honeycomb, we took chocolate chip brownies, and mixed all them to get the creation ready.
There was no name for it in the mind and suddenly there was a name suggested, 'Secret Affair'.
And 'Secret Affair' is was, the name of out second creation.

The second creation was ready and served, and while the tasting was happening and the scores were given, it was turn for the third and the last creation to be created 'The Mental Mix' it was.
The mix consisted on Strawberry Ice-Cream mixed with Chocolate Chip Ice-Cream and there were Strawberry coulis, and some preserved cherries topped with a chocolate garnish.
All the 3 creations were done, and it was that, wish we could create some more, it was soo much fun.

Now that all the teams were done with showing their creativity, it was time for the results to be revealed, Rohan went out to tally the scores and we all had to wait inside.
So there was Rohan coming in the store with the results and the winner was announced, it was 'Secret Affair', and the team heard the name, we were actually surprised. I told myself, the brainstorming that we did before the turn was of no use, it dint help us much, but we got to eat ice-cream though.

So we were announced the winner and was awarded with our creation 'Secret Affair' on their Hall of Fame and their menu and we all the team members got coupons which can be exchanged for a free creation with one month validity. 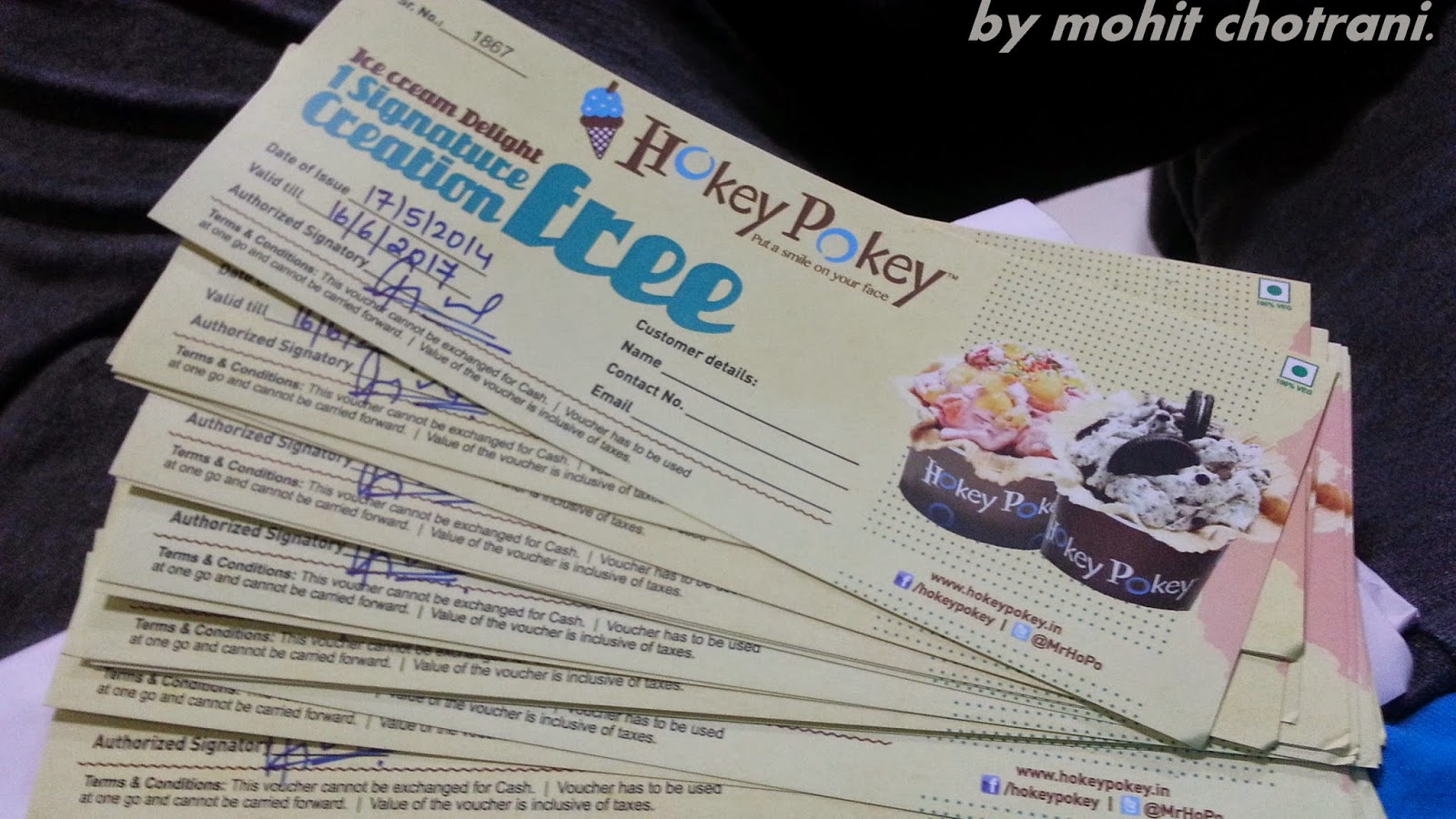 To end the evening, Food Food India channel had come over to cover the event and before we could leave the place, we were caught by the channel people, the reason being we had go give a byte and answer some questions.

The evening came to end with everyone happy and enjoying themselves, and a stomach full of ice-creams.
For this I would like to thank the Food Bloggers Associations India, Rohan - Hokey Pokey owner and all the Food Bloggers who had come there.