One Evening at the Mall

on June 29, 2014
In todays world, I guess everyone has their own bucket list, the things they want to do. Even me, I myself have a bucket list having some crazy things that i want to do like, crash into a random wedding and mentioning you are from the food inspection department, in a flight just shout 'Hi Jack' and meeting some friend named Jack, another one is, restaurant hopping, going to many food outlets in one evening and having something at each place.
Recently I received another mail from the FBAI ( Food Bloggers Associations India ), which said, there is going to be a #FoodCrawl at a renowned mall in town, at the Phoenix Marketcity Kurla.
The event which was suppose to take place at the mall consisted of the bloggers visiting 3 places and enjoying there.

The #FoodCrawl began at The Irish House. The first destination and the starting point of the Restaurant Hopping. The Irish House, gave the #FoodCrawl a boost start, as for we bloggers, if our stomach is empty, we cant do anything, we need something to go inside and give us that kick needed. 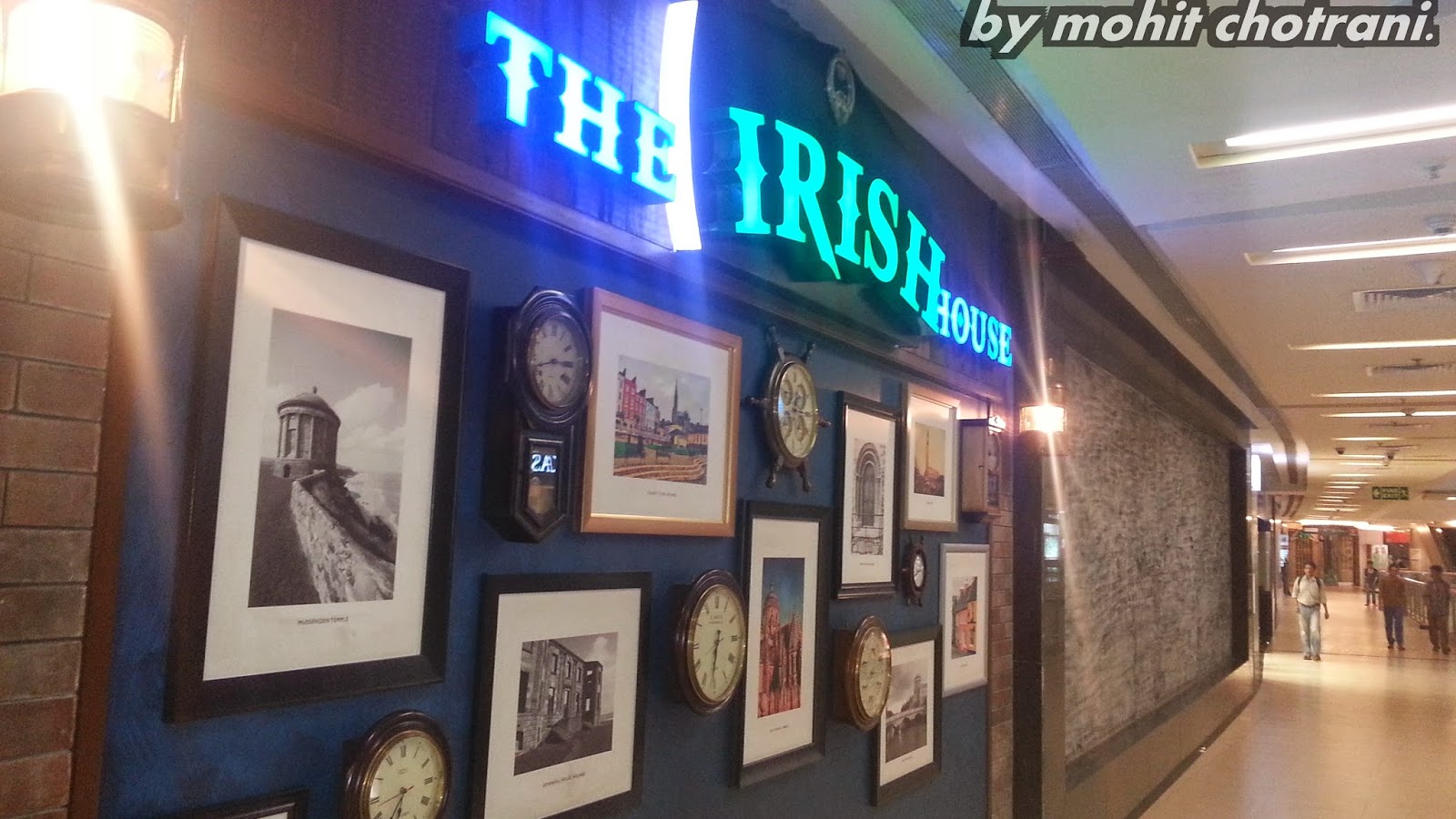 It started of with all the bloggers gathering and like always chatting around and talking with one another. We ordered for the drinks, all those were on the menu designed for us.

To accompany the drinks there is always some 'Chakna' if i have to say, which is snacks, but before that, it was time for the activity which the FBAI head Sameer Malkani never leaves  a chance to get the bloggers working.

The task was that one by one, all the bloggers go behind the bar counter and make a cocktail of choice, but not like always, there was no winning cocktail here.

In the blogging family, there are people who I have assigned names, and some of the family members were present here performing the task while the others were watching them, and trying to copy some ideas.

Everyone was trying out different different cocktails and there were all amazing, new ideas and lovely flavors were coming up.
While the cocktails were being made, there were some people from the family, already attacking the food.


Some of the dishes on for the food were, chicken popcorn, amazing, small pieces, just perfect for finger foods, then there was chicken katti rolls, one of the best rolls i have had till date. Lots of flavor and the chicken was very moist.


Then there was another signature dish of The Irish House, The Chicken Tenders, they were so succulent, and tender like the names says.

But for the vegetarians, they werent left hungry, for them there was, Nachos and some mushrooms.
No doubt the food was amazing, and mouthwatering.

The food at The Irish House for us was over, as it was time to move to the next destination, but the stop wasnt finished, there was another surprise waiting for all of us here.

There was a tray full of shots waiting for all of us, and we werent allowed to leave the place until the tray was filled back with empty glass.

Each person had a couple of shots as we had to finish the tray. Im sure, all the bloggers will never forget this stop, due to a particular reason.

As we were running out of time, we moved on to our next destination, where we were about to have the main course and like always a task, or a game is played in every meet up.
The next stop was, RainForest Resto & Bar. On entering the place, we just had some starters like the Prawn Cocktail, Jingha Nashela, Corn & Cheese Tikkis to start.


The Prawn Cocktail was a bit spicy due to the excess of black pepper, but they were soft, and cooked properly. The Corn & Cheese Tikkis seemed a bit frozen and dint enjoy the flavor much, there was not different taste which i cant explain. the Jingha Nashela, means Drunken Prawns. The name comes due to the purpose, the prawns are flambeed in front of the guest with some alcohol.
The had a very nice flavor, smokiness from the flambe, the spiciness from the tandoori masala and cooked just right.

Like I mentioned, there was a game waiting for us here, simple game, guess the ingredients. The chef had prepared a particular dish for us, and the bloggers turn by turn had to guess the ingredients in the dish right. And with every wrong answer, the participant was out, and the last one to survive and get the maximum ingredients right was declared the winner and awarded a prize.

A simple dish, Pasta in white sauce with lots of vegetables. The list of the ingredients were already written on a paper and handed over and there were in all 17 ingredients.
Tasting started, each blogger started guessing the name of the ingredients, one by one people got eliminated, as the names were getting over, it was difficult to guess more and more. Finally it came down to two people and one of them was declared the winner. But the runner up was also given the prize, as a token of living up to the competition and not giving up till the end.

It was late, and we were running out of time, so we decided to skip the main course, as we had spent a little extra time at The Irish House. Also we were all full, as we had a bit more at The Irish House which was not the plan, but never the less, the activity was completed, some food as had and it was time to move on to the final stop for the evening, like in a 3 course meal it, starters, main course and dessert.
It was time for "Kuch Meetha Hojaae". We headed to Dunkin Donuts, where the meetha was the donut and the coffee, ice tea, whatever needed. 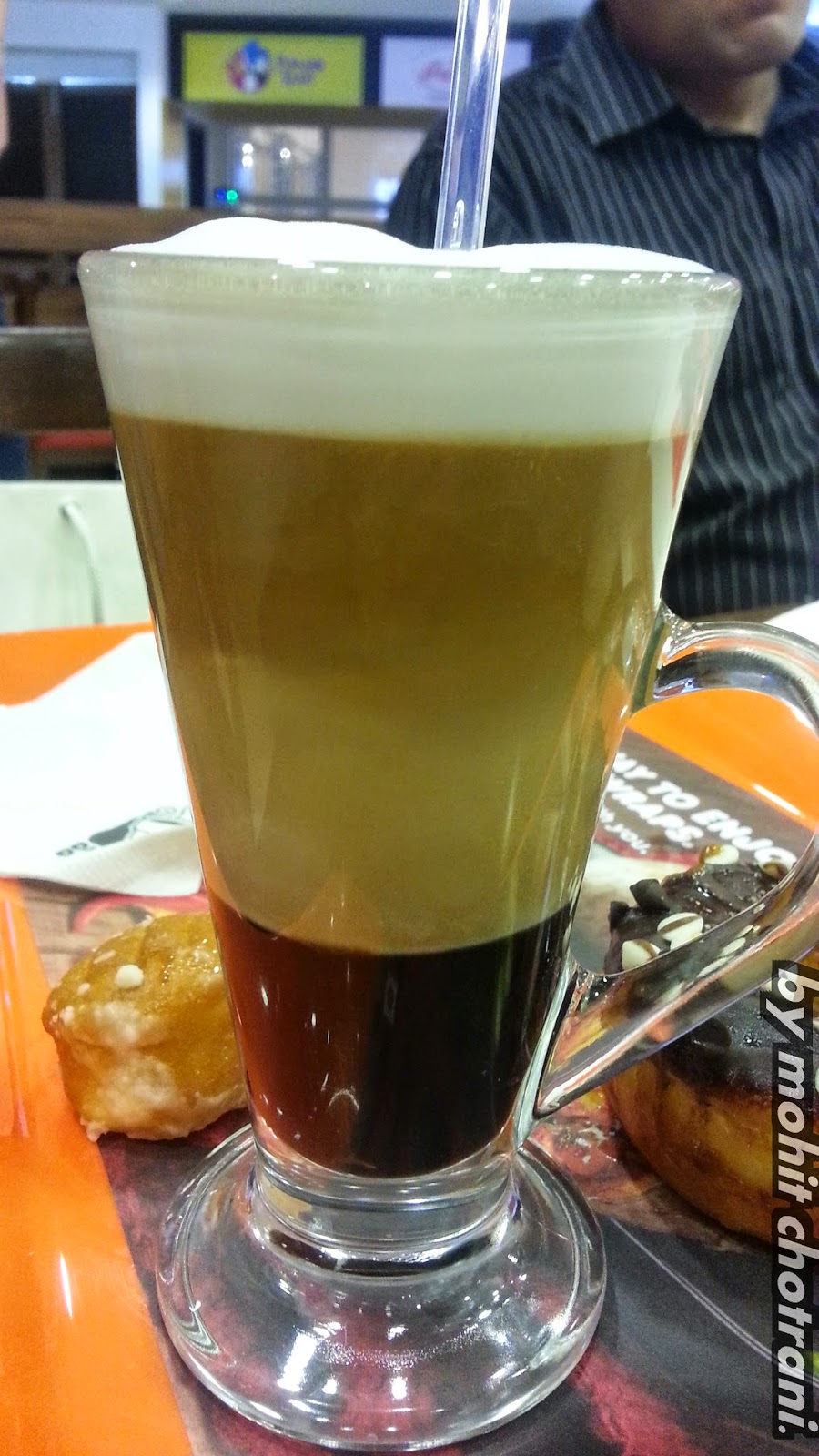 Some got themselves donuts to eat, som got hot coffee, some got cold coffee but everyone being a foodie and having a sweet tooth, there was something or the other with everyone.

Times up, everyone got a bit of drunk, full from eating and satisfied by the meetha. But never a meet up is over without a group photo and the best time was, after eating lots of food and looking a bit fat. :P


It was done, everyone was leaving the Mall, then the started the Good Byes, the Good Bye Hugs and all, but there was one thing we were taking with themselves, i.e the memories of the evening, the friendship, the fun and the entertainment. This was all possible because of the FBAI Founder - Mr Sameer Malkani, along with Phoenix Marketcity Kurla and the people representing the mall, specially @LoveAmruta, who was with us all the time, roaming and telling us what is to be done where.
A big Thank You to all the people i met, it was a fun experience, and a memorable day.
Drinks FBAI Meet-up Food Restaurant Review