on June 24, 2014
Being a foodie, I always like to try a different restaurant every time I go out.
Now a days in Mumbai, there are so many restaurants come up, its very difficult to choose which place to visit.
There is a restaurant on every corner of the road I would say. Also due to so many upcoming restaurants, there is a big competition these days and each restaurant tries to served the best food ever in order to survive in the market.

It was that time of the month, when me and my friends meet up for a monthly dinner which is for sure fixed apart from other small food joint visits.
This time it was me, who had to choose the place to visit and after this I started a bit of research, what is good where, any new restaurants coming up and a lot more on it.
So I came up with the place The Spare Kitchen, located on Juhu in mumbai. Being heard alot about the places from fellow friends, blogger friends and on social media.
It was a bit difficult task to convince my friends for the same, as they don't like to experiment places like me, but they finally agreed to it.

One good thing was that i was able to make my reservation on a social account of theirs, which gave me a first good impression.
As I arrived, I was taken to my table, and had to wait for a couple of friends to come, as me another friend of mine reached early.

The ambiance of the place was pretty nice, simple nothing much done but a comfort feeling could be obtained. the lights were nice and dim, I would say, it is like a romantic place to go with your loved one for some time together.

While waiting for others to arrive, we ordered a simple assorted papad platter to start with. 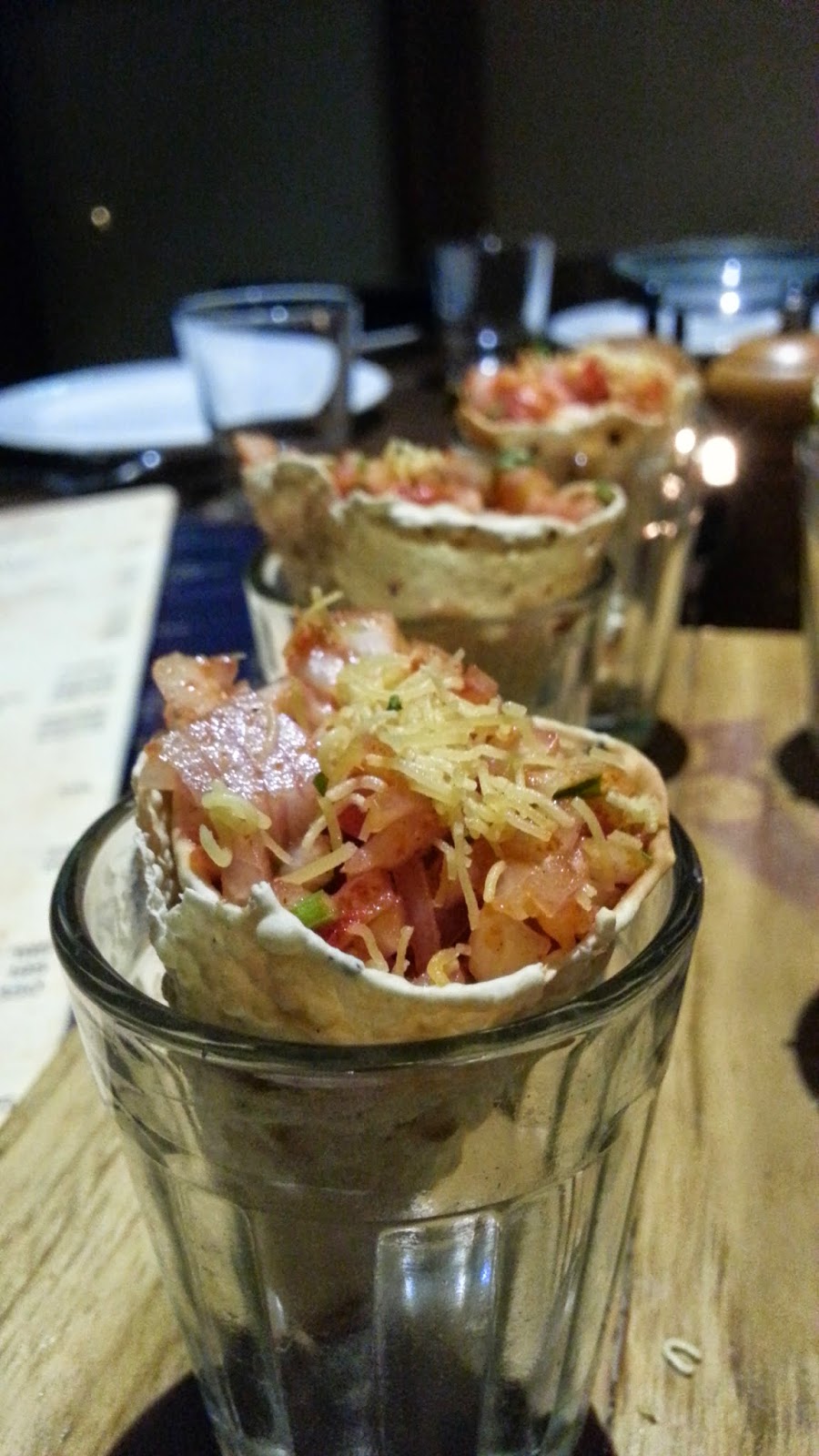 As soon as it came, I was surprised to see it, as it didn't even seem like a assorted platter, it was a platter of masala papad.
When I told this to the server there, he bought us some roasted papad cones, which were uncooked and very disappointing, that how can a person be served raw food. 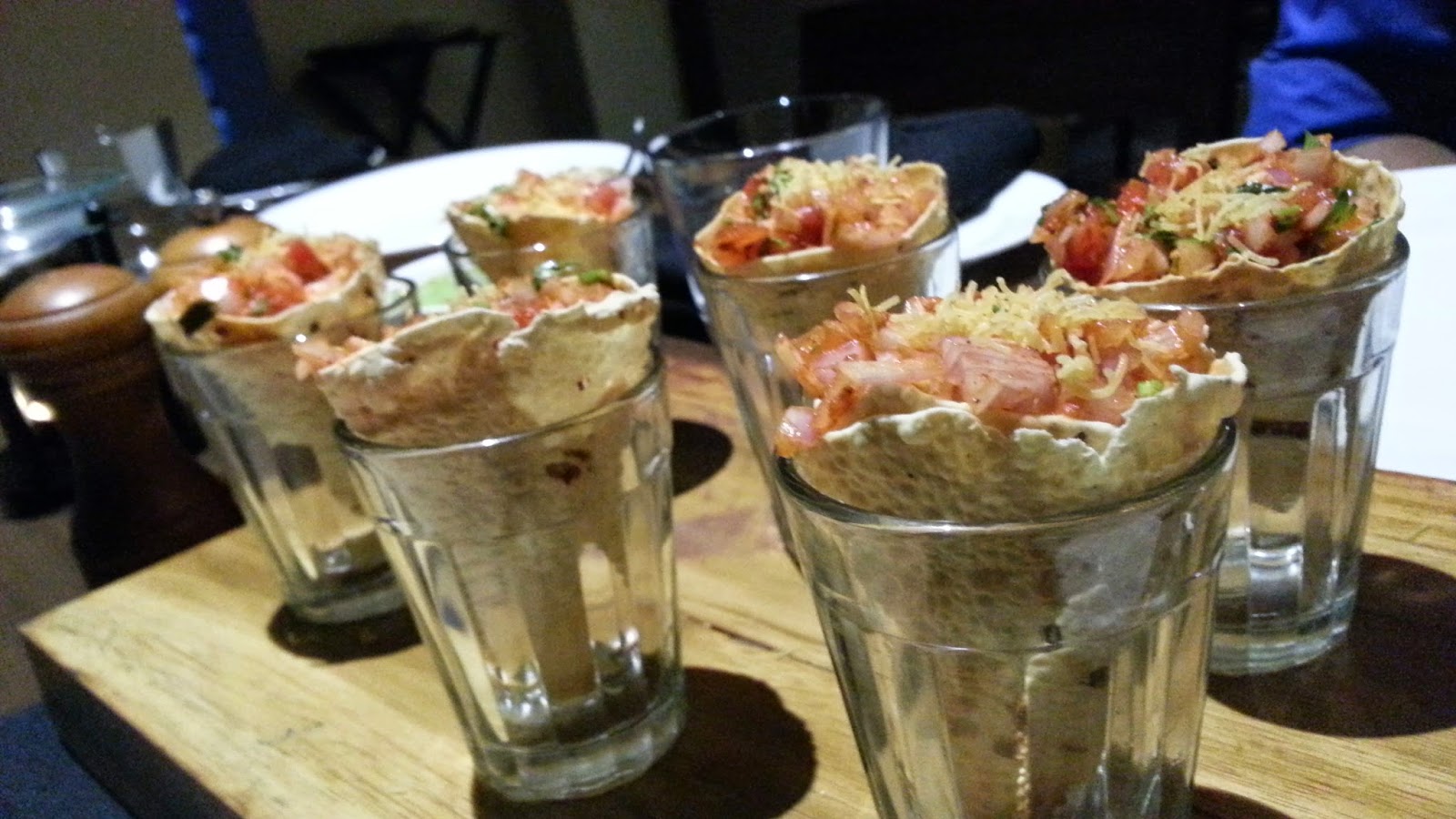 I called the manager and told him the same, he replaced it and got the order replaced and this time it was the correct assorted papad platter which again had the masala papad and some other types of papad, which were nice. 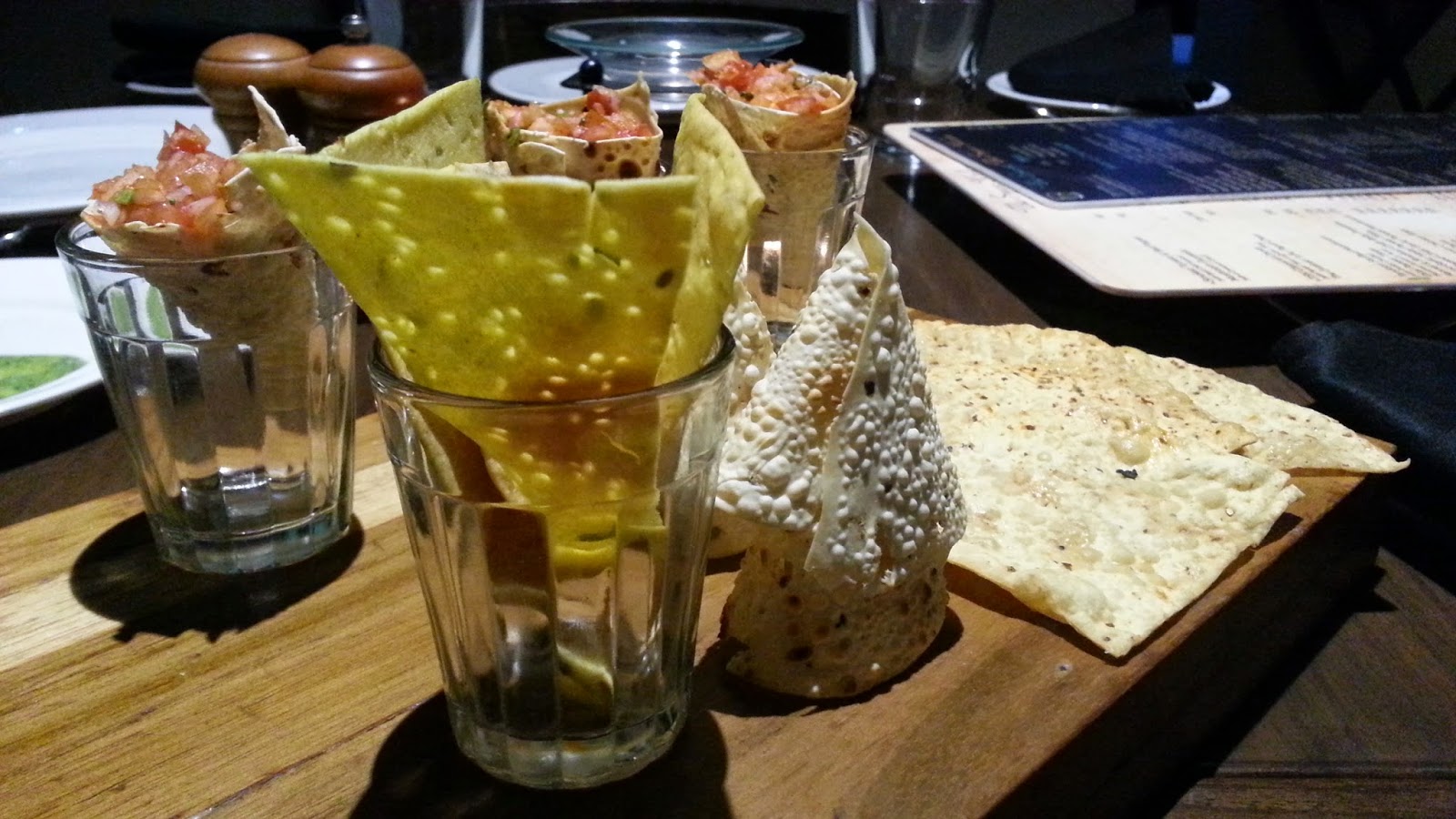 While the papad was being had, awaited people arrived and we were confused on what to order, as it was a huge menu and confusing.
It took quite a while to decide on what to order next as a starter. Being almost half done by eating the papad, we just ordered one starter, the Non-Veg Platter, which consisted of 4 different types of kebabs, namely Malabari Lamb with baby gunpowder uttapam, Gilafi lamb seekh, Sesame Chicken Seekh and Chilli Garlic Chicken Tikka. 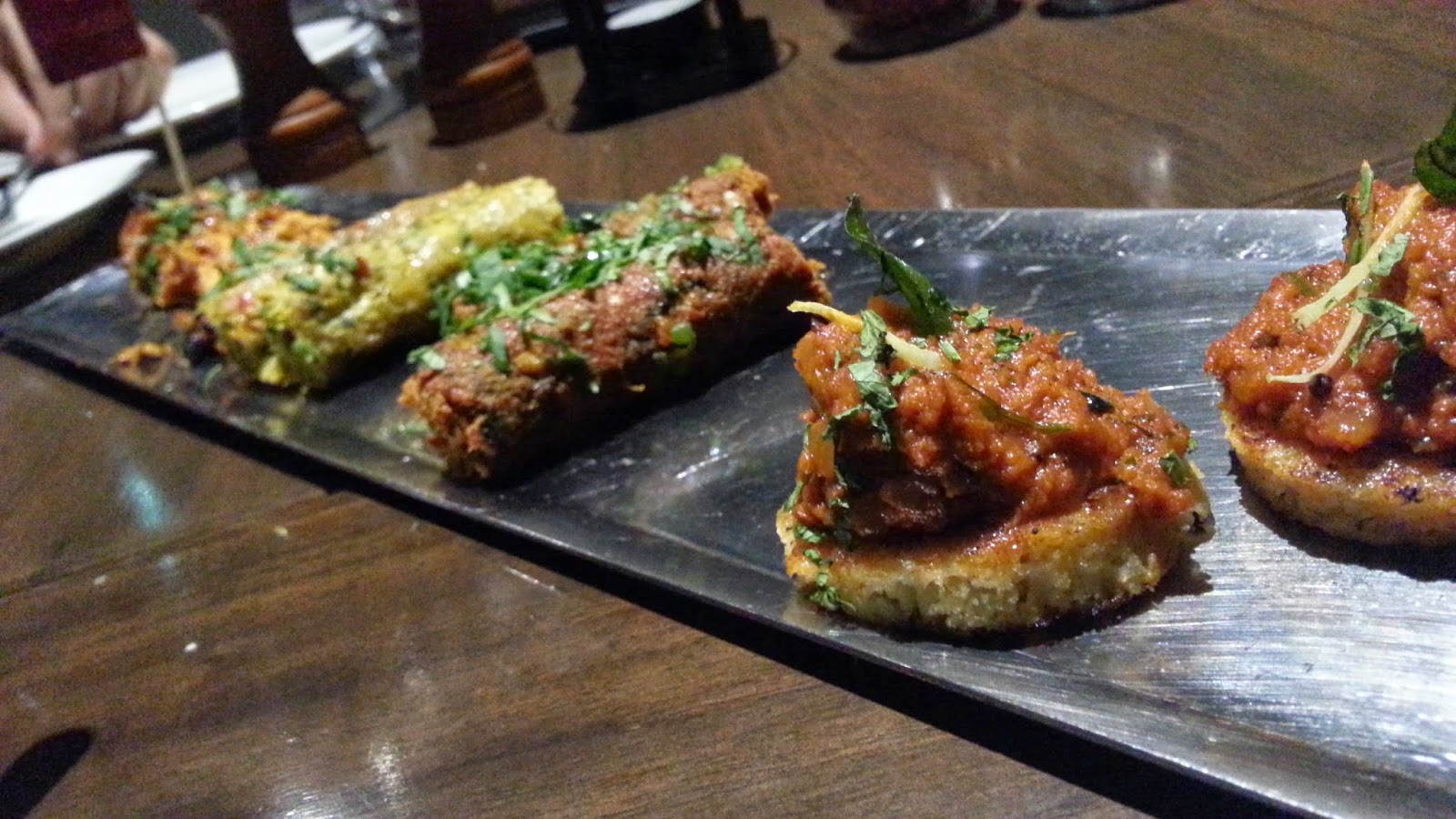 The Chilli Garlic Chicken Tikka has a nice flavor to it, but was a bit chewy as it was a bit overcook.
The Sesame Chicken Seekh was pretty good, had not very strong flavors, just proper. The Gilafi Lamb Seekh, the lamb was cooked perfectly, but the cardamom was overpowering
and had a very distinct flavor to it, which i didn't enjoy much. 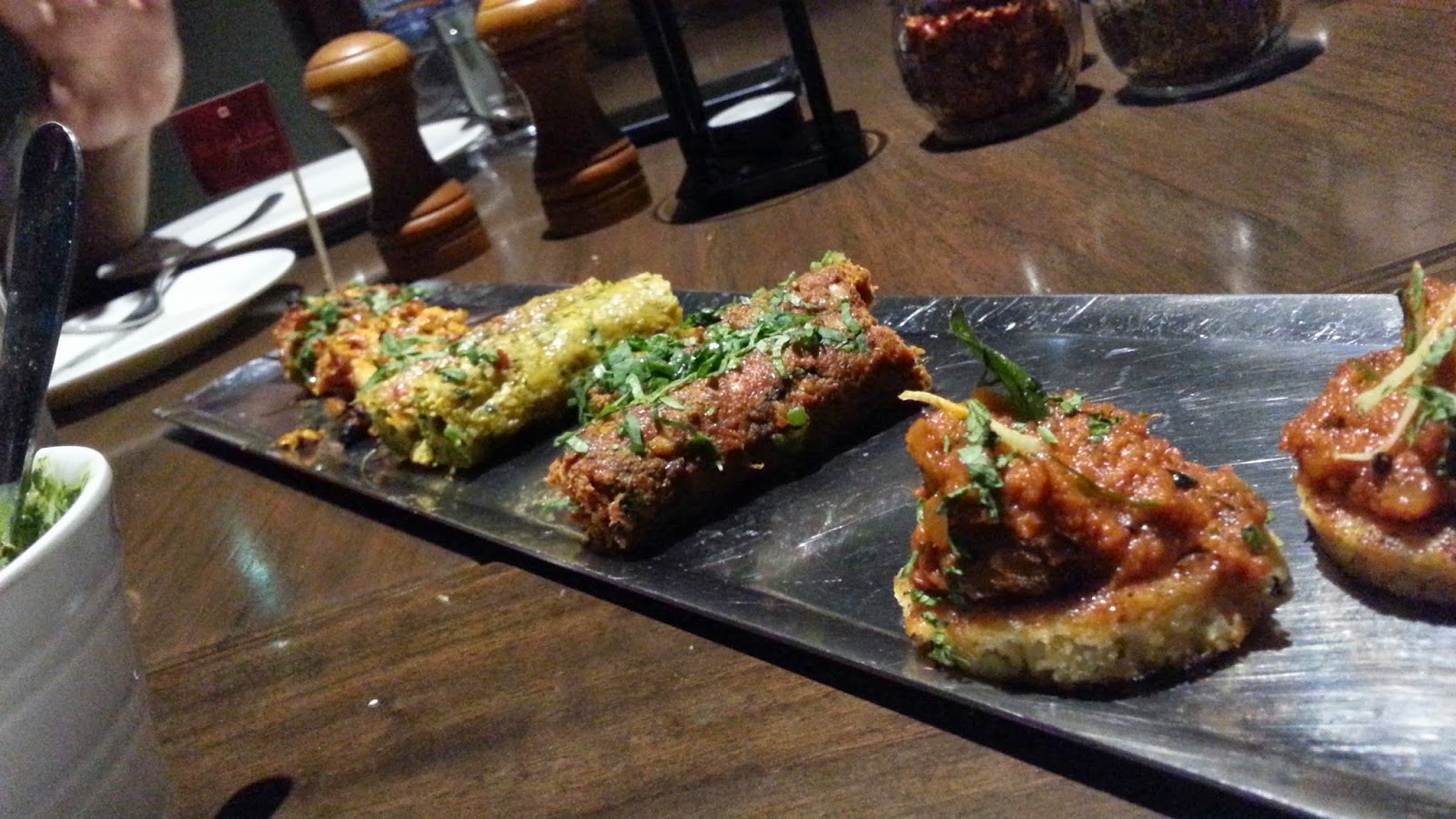 Lastly there was the Malabari Lamb With Baby Gunpowder Uttapam, the Uttapam were very soft and nice, the lamb was cooked properly and this was one god dish on the platter.

Everyone on the table were a fan of pizza, so we decided to order a big pizza, which would have been enough for all, after going through the menu, we ordered the 'Italian Mafia'
sounds like a mafia to have, it consisted to 16 spice chicken, cheese, basil and cherry tomatoes.
A person expects pizza to have a nice amount of cheese and the chicken pieces if its a chicken pizza.
It took them about 20 mins or so to get the pizza, and when it came, i could count the chicken pieces on my fingers, there was hardly any basil on it, and cheese, nothing compared to other places, I can say, that it was the worst pizza I have had till date.

With every food, everyone needs something to drink, so we called for ice-tea, very nice, something good finally from the restaurant. I enjoyed my ice tea for sure.
We also order the Chicken Milanese Burger and the Chicago Burger, with their accompaniments. 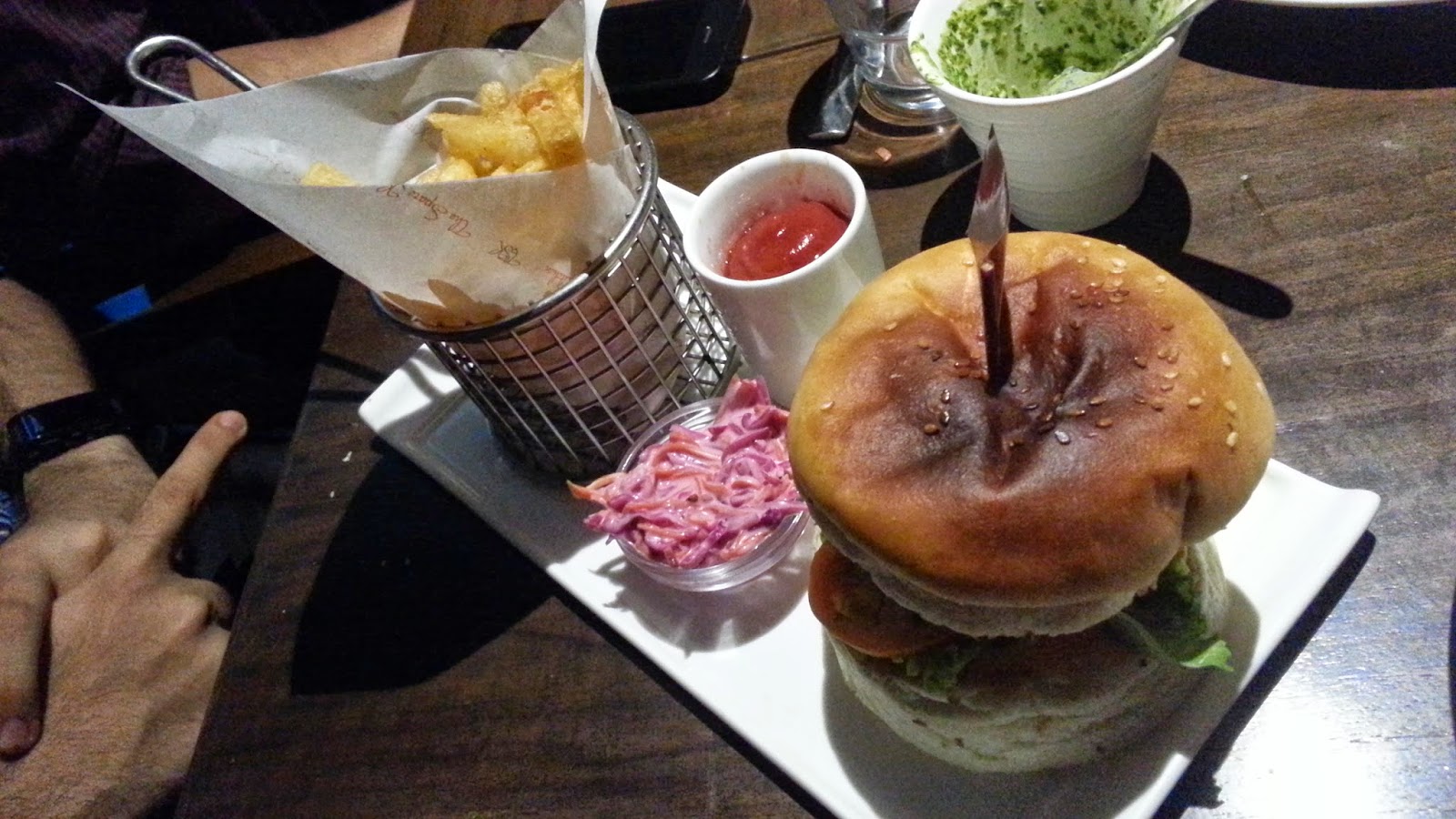 The Chicago burger had mince lamb, taste wise pretty good, but the burger buns, i.e the bread was pretty huge and there was less of meat and more of the bread.
The fries were very crisp, as i like but they were a bit more oily, we had to ask for tissue paper so that we could drain of the excess oil on the paper.

After having all this, we were all full, and didn't feel like having anything else, not even dessert.
Called for the check,didn't find it quite expensive, as we were thinking it would be.

Overall experience, ambiance was pretty good, liked the atmosphere, service was below average, Did not enjoy the food personally after hearing alot about it.
Price wise reasonable as compared to other restaurants, everywhere I guess it is the same or so.

I would think quite a many time before visiting the places knowing that I have many options available.

P.S. Sorry for the less picture, but all were hungry that I forgot to take the other pictures.
Food Restaurant Review