on September 08, 2014
Its that time of the year, where in the town, begins the most happening week for food lovers, Restaurant Week. This time it was something different, it was based on European Cuisine. As said, the main motive of this week, was to make the people of Bombay familiar with European Cuisine and try new dishes.

As mentioned by the European Union -"With its ‘Restaurant Week’ scheduled from 6th – 12th September in Mumbai, the European Union (EU) is all set to take consumers on a European gastronomic trip. Held as an extension of its ‘Tastes of Europe’ campaign, the ‘Restaurant Week’ aims to increase consumer awareness about European dishes, ingredients and flavors in India. Involving a collaboration with high end restaurants in Mumbai catering to European cuisine, the ‘Restaurant Week’ will see these restaurants whip out dishes guaranteed to tease Indian taste buds and in turn grow an appreciation for European produce, dairy products and wine."

So the first stop of the Restaurant Week was Smoke House Deli, located in Bandra Kurla Complex. Before I get started, there was a funny incident which took place at the place. I was going along with a close friend of my Jahan Bloch blogging at http://toxicbaker.com/. We were suppose to meet for lunch and don't know why, but instead of the Bandra Kurla Complex outlet, I called her at the outlet located at Pali Hill. After meeting her at the Pali Hill outlet, i realize that it was actually the other outlet and then there were many things i got to hear from her. 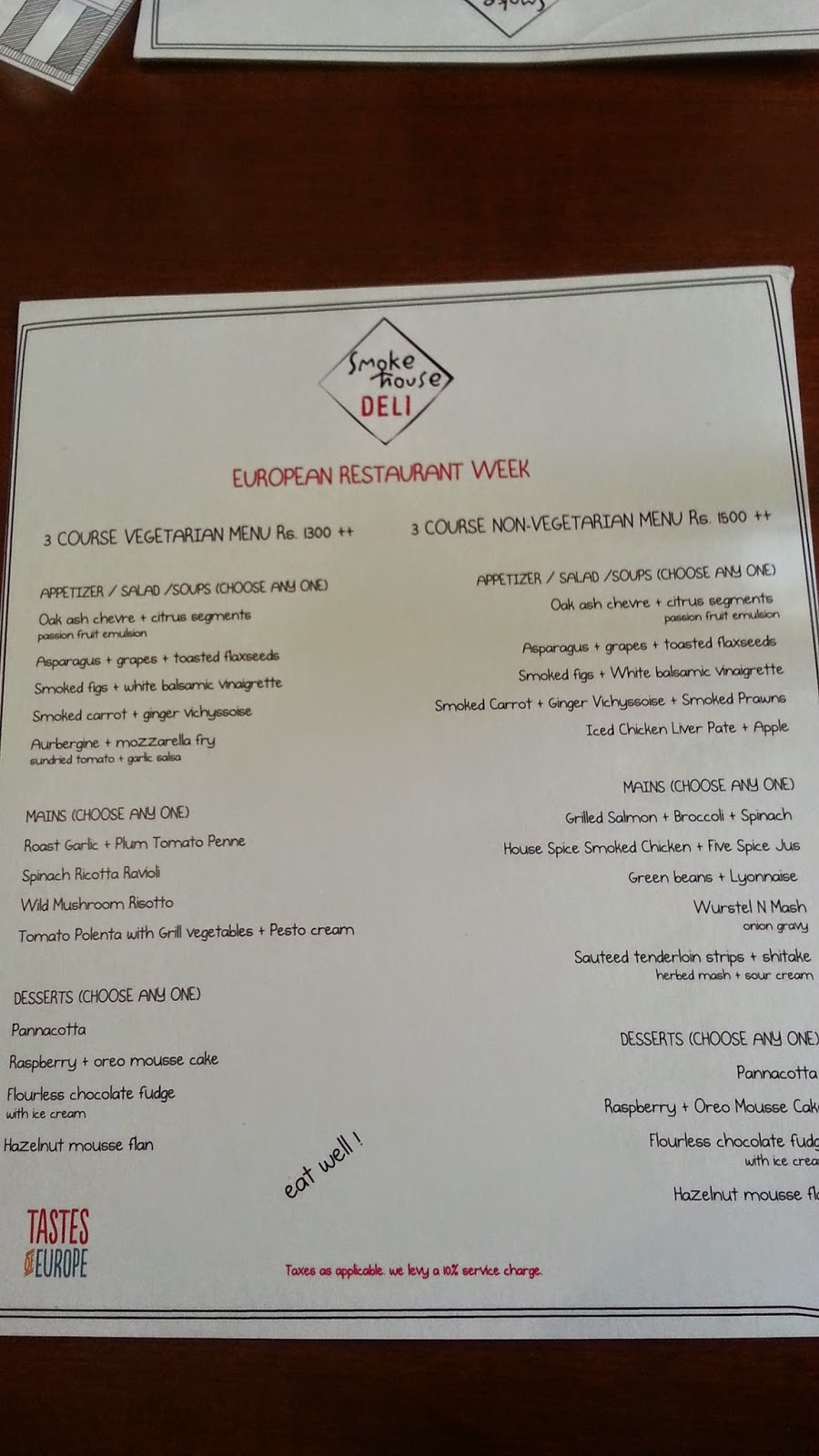 Never the less, we arrived to the other outlet, were escorted by the host to our tables, where we were served with the specially designed menu, which was for the European Restaurant Week or #TasteOfEurope. 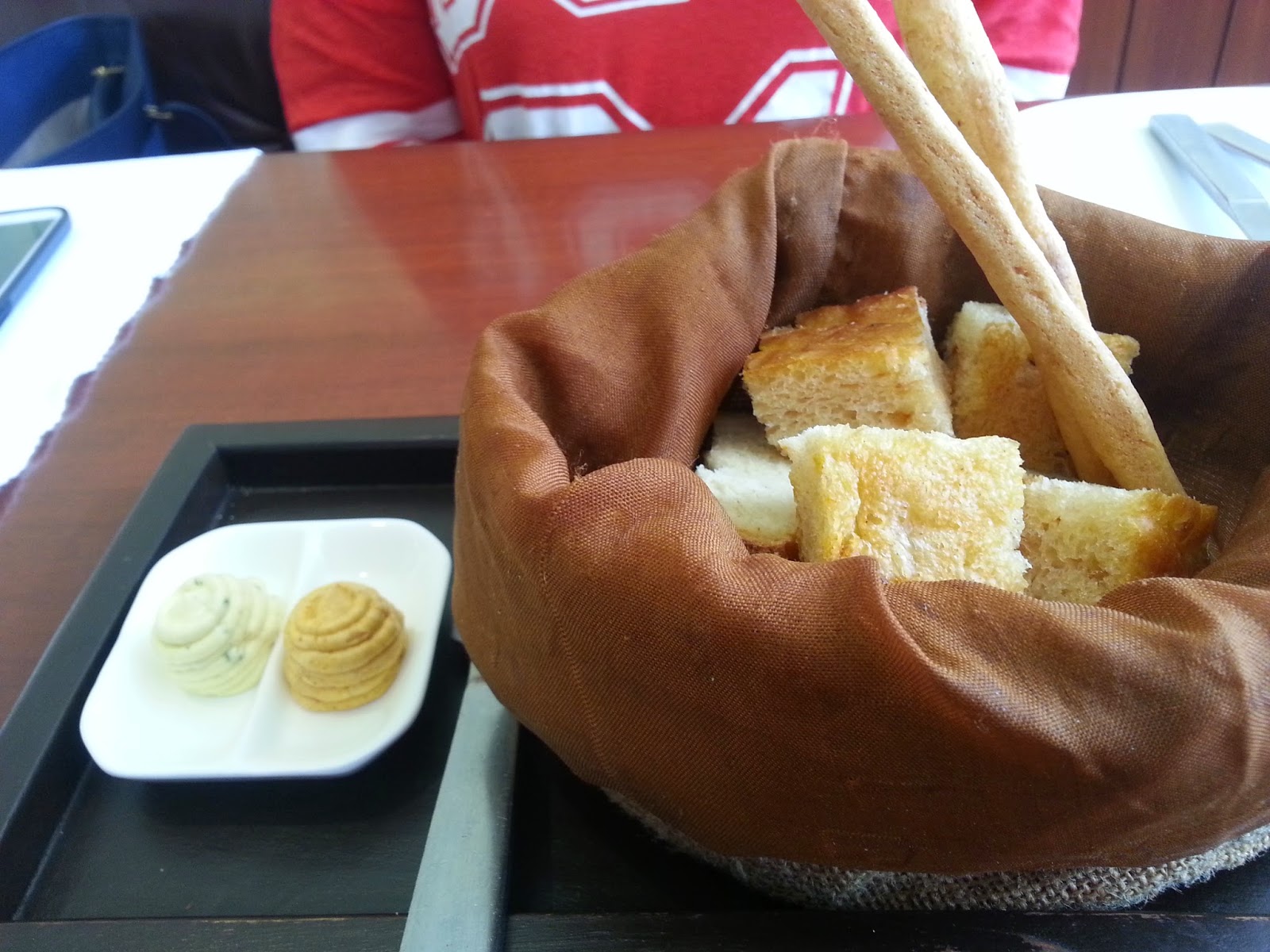 To begin with, after being handed over the menu and greeted very well, a small beginning of food was given, a bread basket with some great breads and flavored butter. There was a variety of breads, and some of them were just amazing.

As we were two, so we decided to go for the veg and the non veg option and try out both of them, so from the range of dishes, the 1st course, salads/soups/starters, we ordered the Aubergine & Mozzarella Fry with Sundried Tomatoes and Garlic Salsa, along with a salad, which was, Asparagus & Grapes with Toasted Flax Seeds Salad.

I personally am not a big fan of Aubergine, but this dishes consisted of Pesto sauce, with olives, amazing salsa, with cheese. The texture was amazing, it was one of the best dishes I had here, the mozzarella was going very well with the aubergine and, it was really crisp. Honestly speaking, i have started loving aubergine after having this.

To accompany this, Jahan, the toxicbaker, ordered for the Asparagus & Grapes with Toasted Flax Seeds Salad. I personally dont like salads which contains lots of green leaves, if i have to say, lettuce, but this was an exception. The Asparagus was a bitter in taste, where as the salad had a good amount of grapes, cherry tomatoes, that were complimenting each other. Taste wise, it was another good dishes that was served to us. So the score was 2 up for Smoke House Deli.

With some great start to the food and service, it was time for the next course, the mains, out of the many choices, we had to come up with two of them which was a bit difficult as all of them were mouthwatering and tempting with the names. Finally the two dishes we came up with were Wild Mushroom Risotto and House Spice Smoked Chicken with Five Spice Jus, Green Beans and Lyonnaise.


I love Italian cuisine, the variety of pastas, the risotto, other dishes like the Sicilian Caponata and many more. So when my risotto arrived, I was pretty happy that, I love this. The first bite of the dish and it was just spot on. The texture was perfect, the seasoning, the flavors were bursting, which all together made it the best risotto I have had in town. I would say, if you like Italian food, Do give this dish a try and I'm sure you will not regret it.

Another dish in the mains the House Spice Smoked Chicken with Five Spice Jus, Green Beans and Lyonnaise, according to me was lacking a bit in flavor, as the chicken pieces had flavor on the outside, was bland in the center.
And the other issue was, my friend, doesn't consume wine or alcohol, and the dish somehow had wine in it, couldnt eat it though. But took over my risotto, and unfortunately, that also had wine in it. While all this was going on, the Team leader came to us and asked us about any issue, and after telling him the reason, he insisted on getting the risotto exchanged and making it a new dish, without wine. I must tell you, i was very generous of the person to do that and get it made for us.
So now the score was, Smoke House Deli, up 3 and 1 for the staff.

It is people like these, that make the restaurant and the customer very happy and I really appreciate that. There was one thing I forgot to talk about, and that was the ambiance of the place. The place had a nice, white interiors, very simplistic and a place that gives the impression of being clam which was really good.

Any meal is not over, until there is some sweet or dessert to go with it. And who doesn't like sweets and desserts. Out of the many option, my eyes were onto, the PannaCotta and Raspberry & Oreo Mousse Cake. I didn't worry about putting on some extra calories, it was just, I had to have them.

There came the desserts was the words I spoke when I saw the plates coming towards the table. They both looked just tempting, I could just dive in them. The Raspberry and Oreo Mousse Cake, had the most amazing flavor of Raspberry and Oreo. But the sad part was, the base which was made from oreo, was a bit burnt and had a little after taste of it. The texture was very smooth, wobbly and just perfect.

Not to forget, the Italians favorite, The PannaCotta. They say, you should always keep the best for the last, and that exactly what was it. This PannaCotta was the best in town. I haven't had another, which is close to this. It was not very sweet, which I like. had the nice creamy texture and along with that, it was still light.
Anyone visiting here, has to give this dessert a try.

This bring to end of the meal, and due to the food and the desserts, me and my friend were full and couldn't eat another bite. All thanks to the Chef, a special thanks to the service staff for taking such good care and the lovely hospitality, and #TastesOfEurope, for giving us this opportunity to try out the food.
Im for sure visiting the place again in future, for the food and the hospitality.
cheesecake eggplant european Food foodie foodlove healthy hungry hungrybawarchi mushrooms Pannacotta Restaurant Review Risotto Salad