on June 29, 2015
First of all, would like to apologise for being away for such a long time and not posting anything on the blog. Its the work that has made all this happen and along with this, if you guys know, my youtube channel, the Fat Toxic Bawarchi (FTB) which I started with Jahan Bloch and Roshan Shetty is taking some of the time as well. To which i will say, you all must go and check it out if you havent, its all about food, fun and masti.

Coming back to the point, after starting the channel, we three decided to host a blogger's table, the first #FTBBloggersMeet at the newly opened property JW Sahar's JW Cafe which has a Barbeque Night every saturday.

To begin with, JW Sahar, a newly opened property by the Marriott Group of hotels, we began the evening with one of the most amazing, yet simple welcome drinks - Mango Shake, but there was something special about it, i.e. the caramel dripping down the side of the glass.


Im sure Zenia Irani will agree with me on this, that the mango drink was one of the best things that we had that night.. 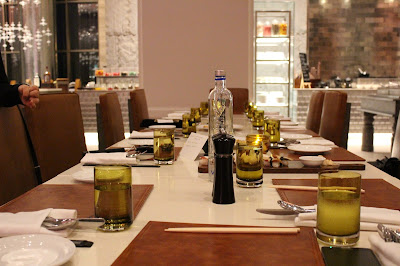 The table all set for the bloggers meet and its a huge one.

It was our, i.e. FTB's first bloggers table, we wanted it to be big and something that people will remember. (Dont know if we were successful.)
But never the less, the evening was filled with lots of food and great fun and talks. 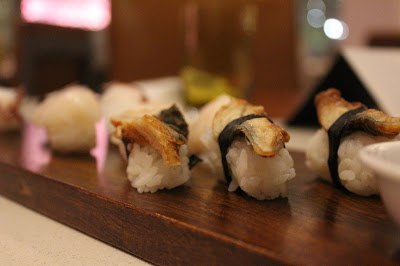 The next thing that came to the table was a good, hearty and mouthwatering platter of assorted sushi. Personally I'm not a big fan of seafood, but this one tempted me to just dig in and give it a try.
There was one with scallops, one with octopus, one with unagi.
Gave all of them a try, and among the three, my favorite was the one with scallops.
Do give it a try and let me know what you think about the others.

After the sushi platter, it seemed like the chef was cooking in a fast forward motion and sending dishes one after another to the table.

A huge variety of pizzas came, from simple pepperoni, to chicken and basil, to a veggie pizza and I can't recollect the last one.
The pizzas were thin like paper, perfectly cooked and just amazing.

Being a 'Mumbaikar', how can I miss the chaats, but unfortunately, this time I was a bit unlucky and couldn't get my hands on them as they were over as soon as they came to the table and as soon as everyone finished clicking the pictures. I guess, I dont need to say anything else about the taste. 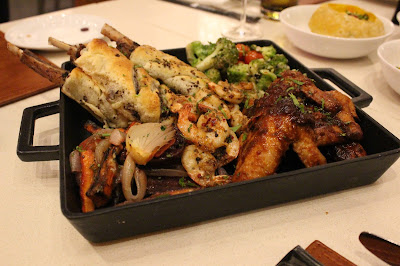 When you come for a BBQ Night, there has to be some grilled, barbequed meats along with some kebabs, and more.

The platter on the left, consists of Lamb Chop Wellington, a twist to the classic Beef Wellington, then there were some chicken wings, prawns and some mixed vegetables.

Honestly, there was soo much food on the table, I dint have the place to try any of this and gave it a pass, but the Lamb Wellington was something I would want to try upon my next visit, its quite an interesting idea the chef has come up with. 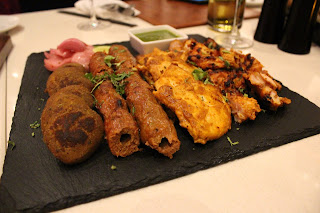 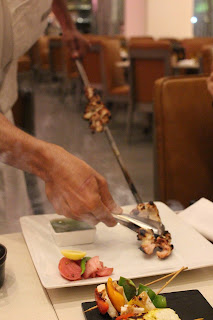 There was one other thing apart from the kebab platter, the malai chicken tikka. The way of presenting it was just amazing, as you can see in the picture, the chef was taking them off the rod in front of us on the table itself.
Piping hot tikka, with the chutney, its a sort of being in heaven for me, if I could have just arrange for a naan or a flatbread, it would have been perfect.

Taste wise the tikka was a bit salty but nice tender and moist. If the salt could have been reduced, I could have had quite a lot of of tikkas then.

There were some more items that chef had in mind for us, which he sent to the table. On the right we have the Chicken Satay with Peanut sauce and on the left we have veg assorted grill platter, consisting of grilled pineapple, grilled mushrooms and some panner to go with it. Among the veg, the pineapple was just cooked spot on, there was still sweetness but had the charred flavor as well. The mushrooms were over charred and which spoilt the taste of them (Im a big fan of mushroom). Then the paneer, one of them was grilled with a simple marinade and the other was similar to a shashlik, I gave paneer a pass, coz when there is chicken satay with peanut sauce, how can one eat paneer and commit a crime (Just kidding). The chicken was tender and cooked spot on, but flavor wise, I dint enjoy it much as it has a strong flavor of the coconut, which I personally don't like.

Apart from all these, there were other sections as well, for eg. indian, thai, lebanese, pastas and more, to which I gave a pass, as I had eaten a lot already and was stuffed, but had kept some place for desserts.

Its become a ritual for me that I don't end my day or my meal without having a dessert or something, even if it has to be a small piece of chocolate, I have one before going to sleep. Here there was not only a great variety of dishes, but also a huge variety of desserts and sweets. From waffles to ice creams, to cheese cakes, to indian desserts and a lot more.

I gave the profiteroles (image on the right), seemed lovely, but upon tasting, they had become very chewy and were difficult to bite in.

From the other varieties of desserts, I enjoyed quite a lot of them and they were all yummmm.
The tarts, great filling, perfectly rolled pastry and great texture.
If I had some more place in my stomach, I would have had all the desserts which were there on the table. But never the less, whatever I had, I enjoyed and did regret it a bit later after reaching home, by just thinking the amount of calories. (I never regret on food :P ) 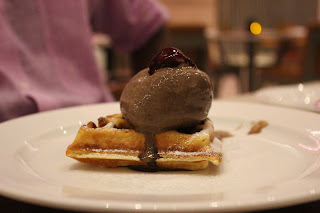 I love waffles, you give me waffles, and I can have it the whole day, but I need various toppings with it in that case.
Here there was a live waffle station, where we could place our order and have them served with our choice of toppings. The waffles here were very soft, nice, not very sweet and just brilliant. The best part was, hot waffles served along with chilled dark chocolate ice cream, the first spoon of that felt like heaven in the mouth. Another waffle (image on the left) was served with some hot chocolate sauce and whipped cream. Super light and smooth whipped cream and hot chocolate sauce, just looking at it made me wanna dive in it right away.


To end this, I would say, that the event was a great success thanks to the lovely people in the picture below. There was a lot of food, a lot of conversation and a lot of fun. A special thanks to JW Sahar for having all of us and making the first FTB Bloggers Meet a great success. 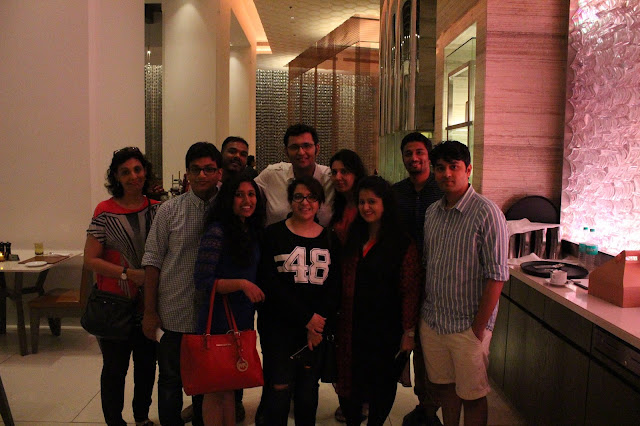