on May 14, 2014
What couple of hours spent with the champion of pizza acrobat Chef Pasqualino Barbasso was like ?


To being with who is Pasqualino Barbasso ? 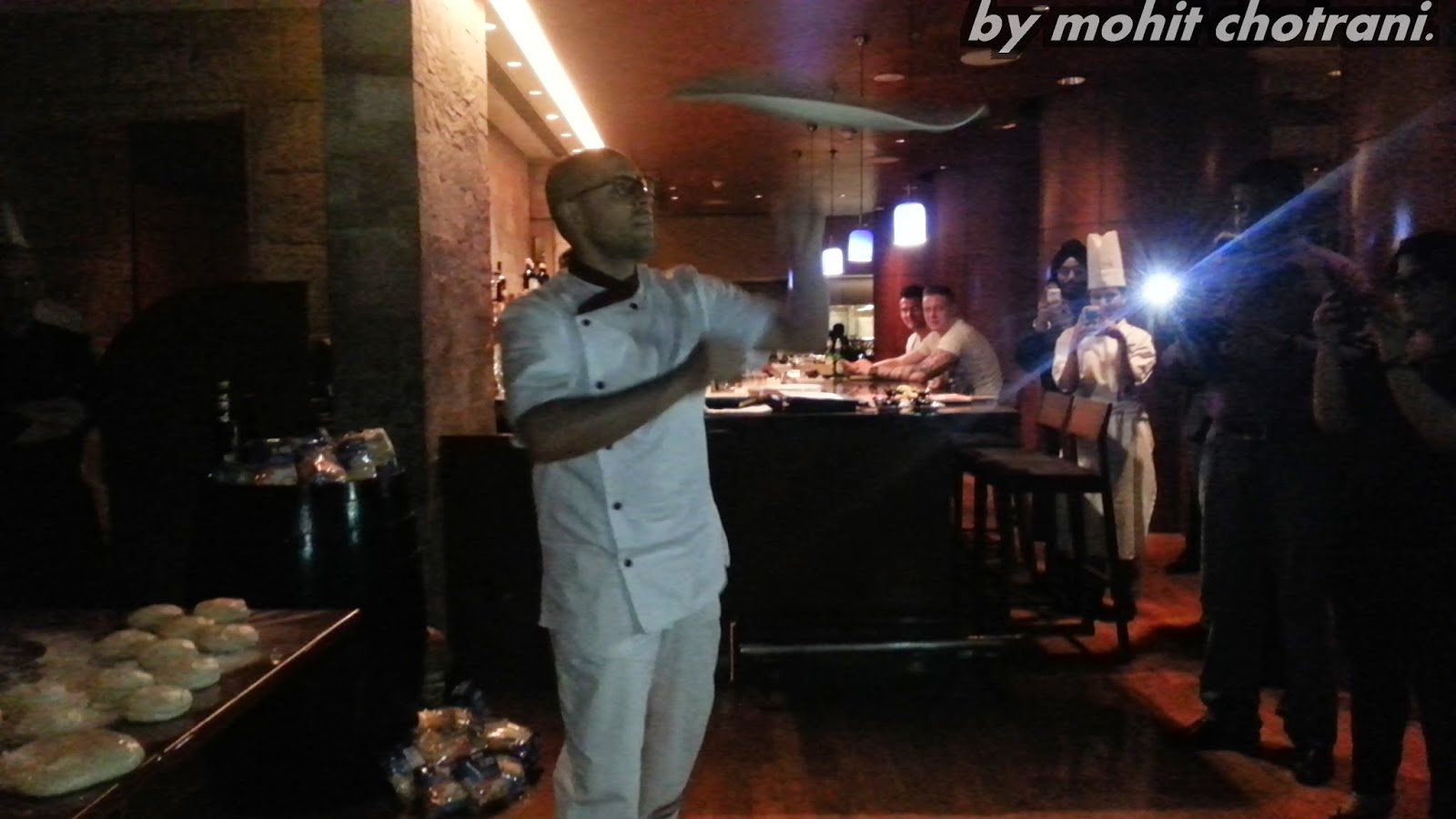 Pasqualino Barbasso is a pizza chef a mission, to make high quality Italian pizza and to do it in the most entertaining way. This 36 year-old pizzaiolo is among the most skillful masters of acrobatic pizza-making and is one of the most famous. Pasqualino has travelled around the world offering his stunning performances, training people and teaching them to enhance the quality and the good taste of Italian pizza made according to true Italian traditions. 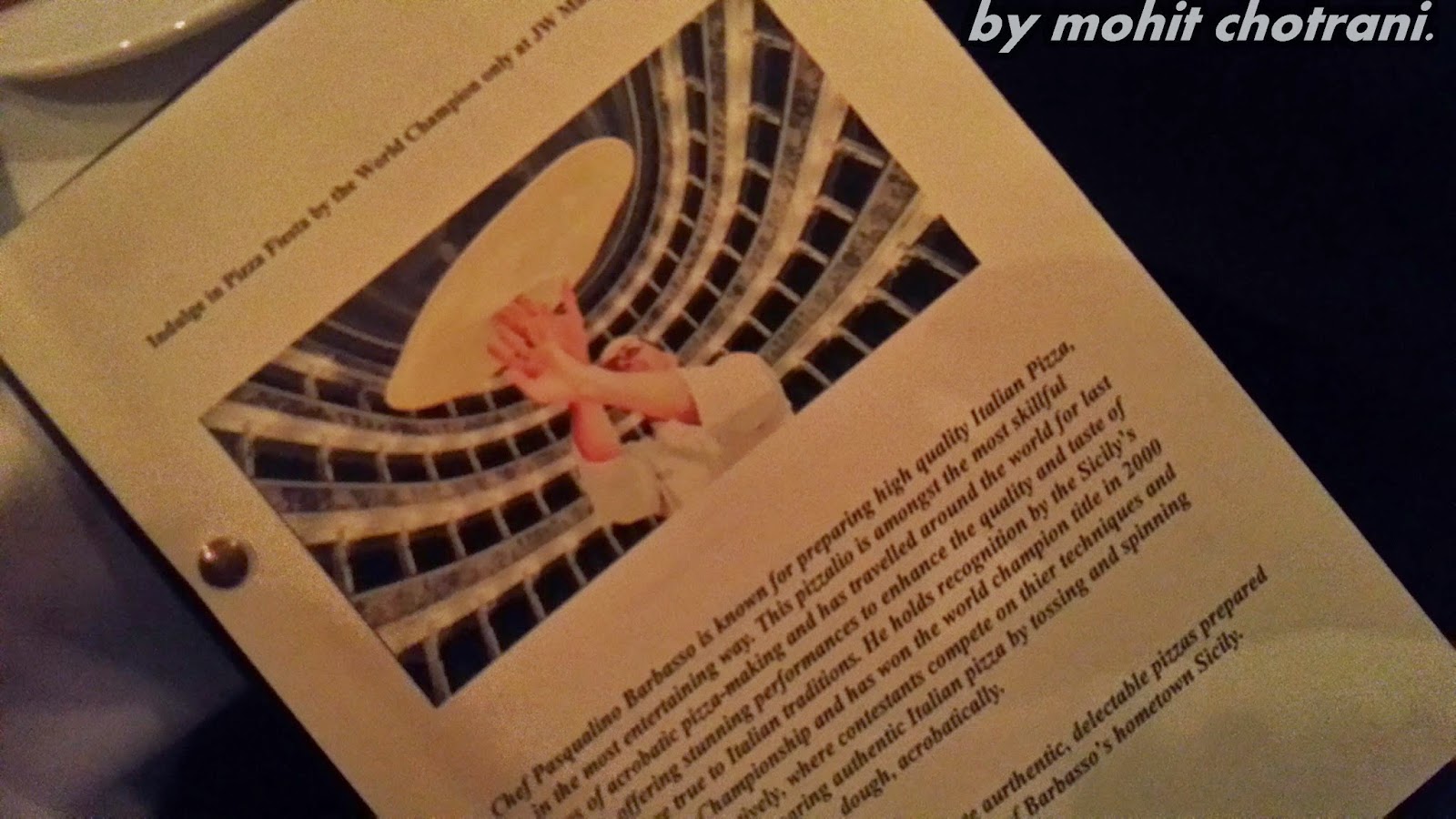 Pasqualino began his career in his family’s Pizzeria, Il Falco Azzuro, in Cammarata, in the Sicilian province of Agrigento, where he still works when he’s not travelling. He underwent formal pizza-making training only at a later stage, because, as he puts it, “the profession of high quality Italian pizza-making is something that one cannot learn only in an empirical way.” In 1998 he won the Sicily’s Acrobatic Pizza championship. By 2001 he was World Champion, a title that he won in 2002 for a second time. Since then he has made dozens of appearances in Italian restaurants and pizzerias around the world.

So it was the day to meet the champion at J W Marriot - Mumbai where the Food Bloggers were reserved for a special chefs table, which consisted of the food, the drinks and special time to chat with the chef and learn and gain knowledge from him.

While all were seated and getting to know each other, talking and sharing knowledge what they had, as many of us had met each other for the very first time. The first thing that came to the table were the anti pasti platter. 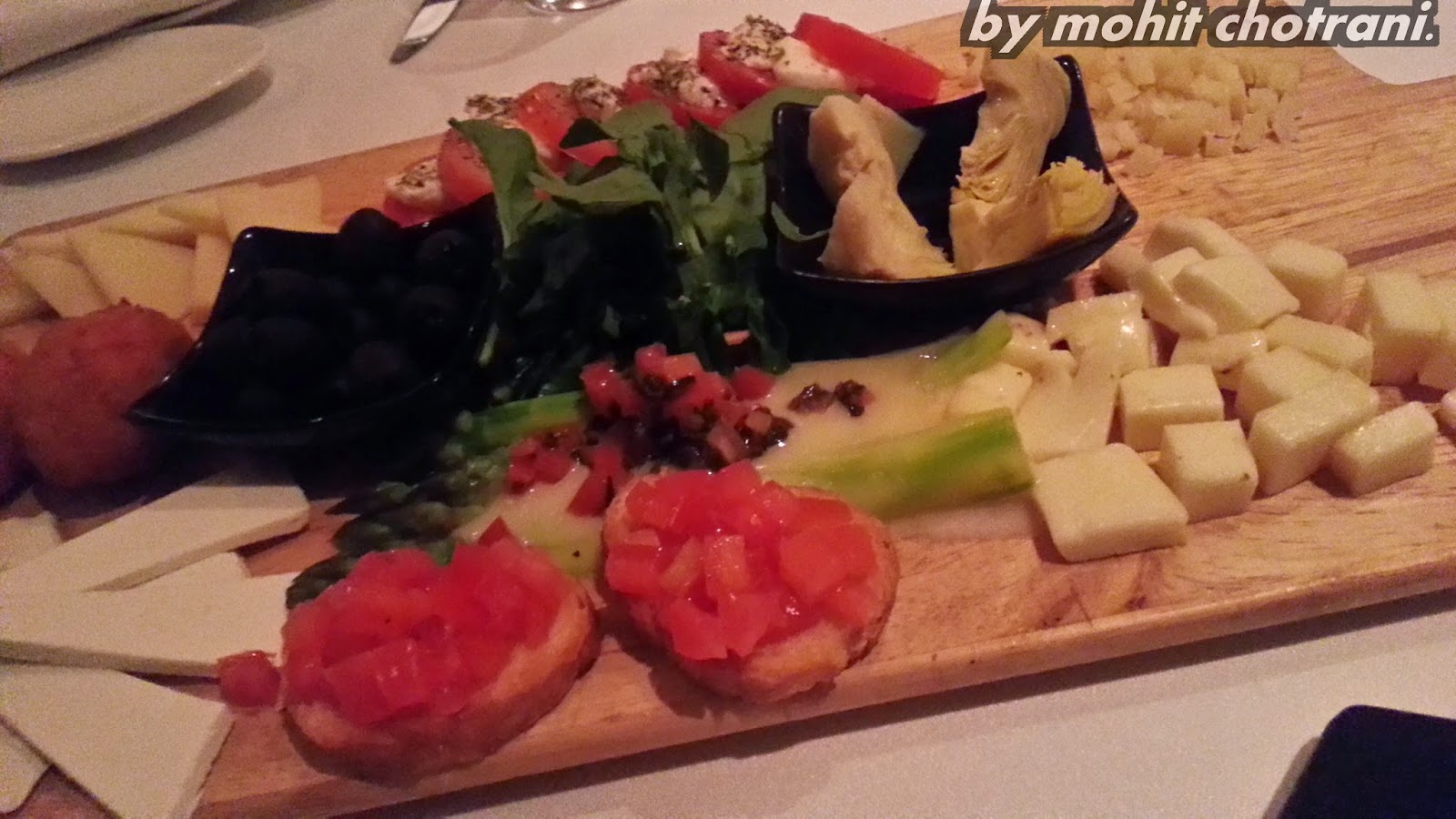 The word Anti-Pasti in Italy means before the meal and is like a appetizer which consist of cheese, bread, dips, some olives and the cold cuts from the region, like the parma ham, bresaola and more. 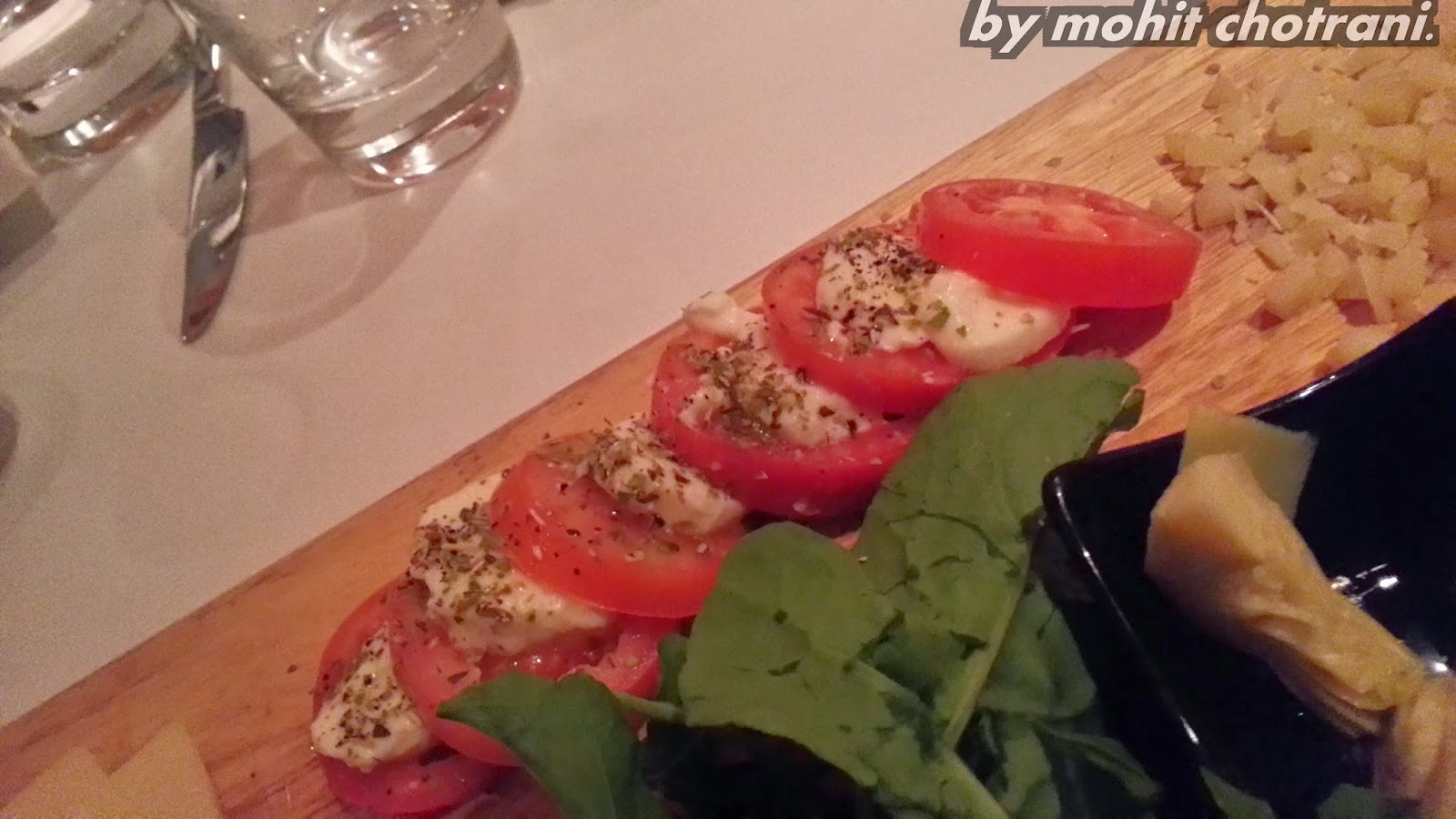 The cheese platter had varieties of cheese, like the Parmesan, Pecorino, salted Ricotta there were olives and artichokes to compliment them, and lastly there was the tomato and cheese caprese.

As the food arrived, everyone got in to taking photos, like it was a celebrity or something and we all got some award wining clicks if I have to say. 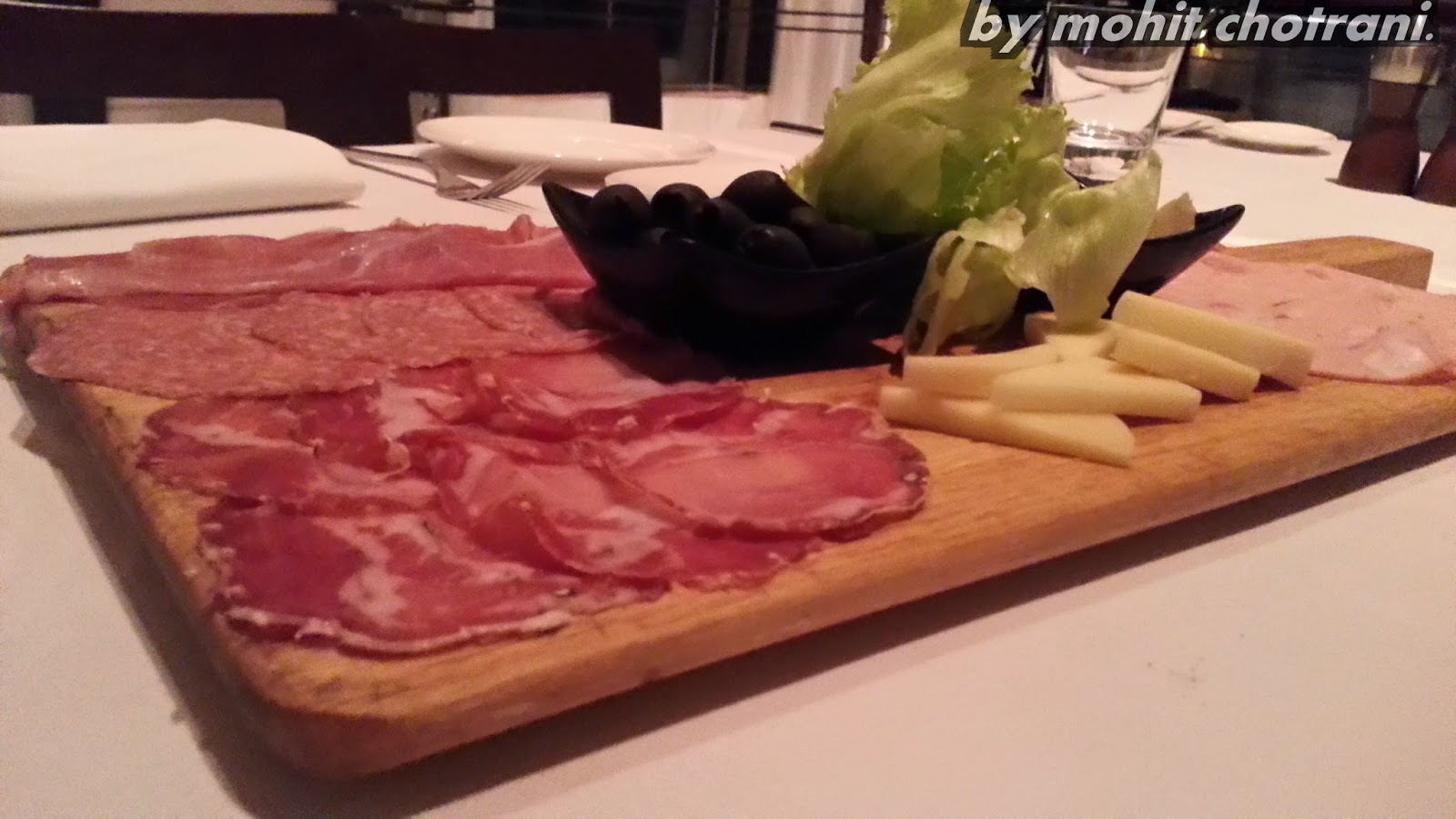 Then came a dish, which seem to have a combination of a pizza and a texture like a papad :P (forgot the name)
Soon the person for whom we all had come and were excited to meet arrived Chef Pasqualino Barbasso along with the head chef of the restaurant Mezzo Mezzo -  Chef Davide Cananzi.

Then the Chef was seating amongst us and it was an honor for all of us to have him between us. Then started the introduction

As time was passing, we all got so involved into getting to know the chefs tricks, recipes, his knowledge and what not.
One thing i got to learn from him, myself being a chef was that how he makes his pizza sauce and whats the secret behind great food. 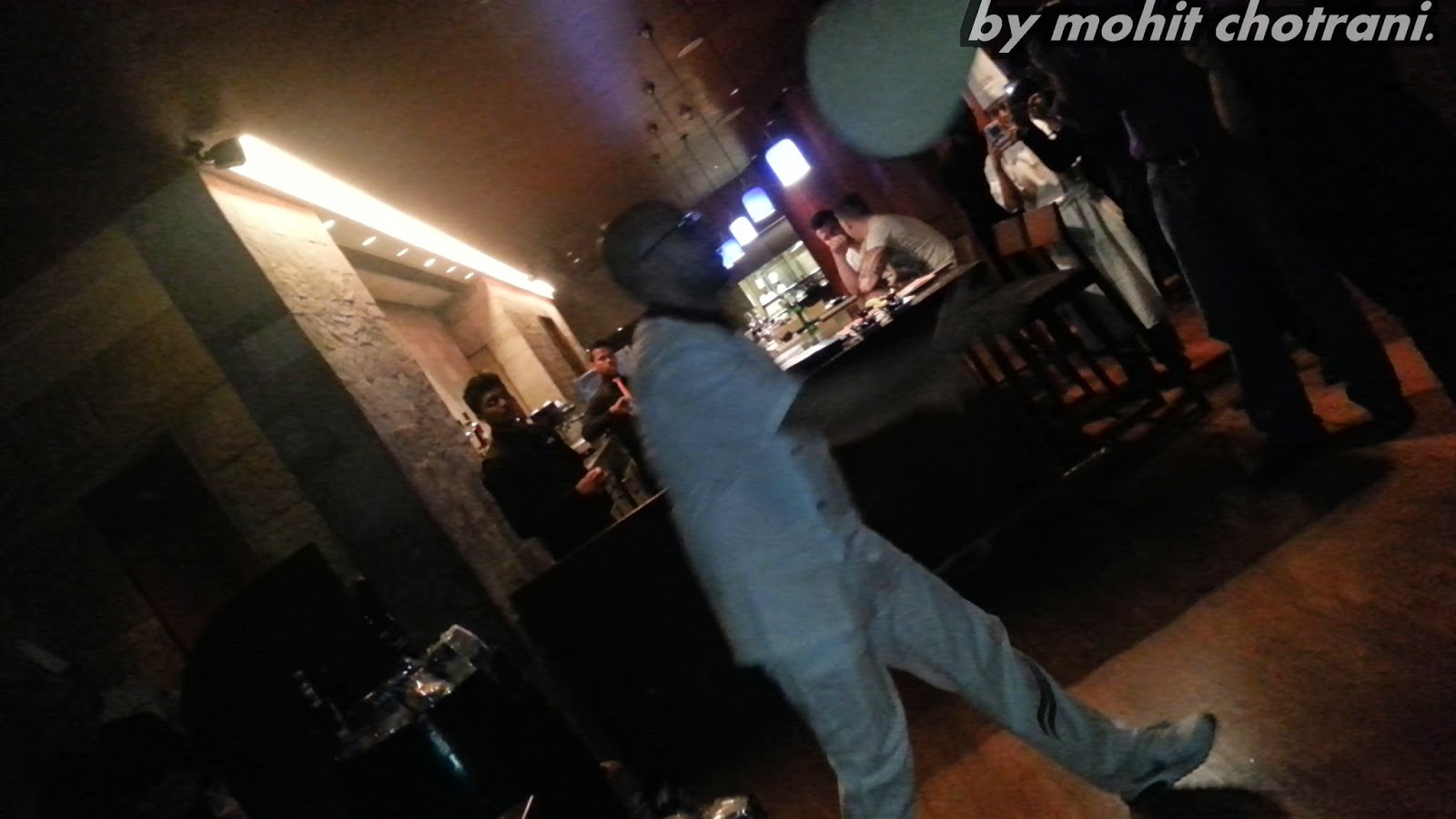 The recipe was quite simple, just tomatoes, salt and basil which is blended to a puree and not cooked, and never to add onion and garlic he mentioned. And the secret to great dish was the simplicity and fresh ingredients.
Also we came to know that his favorite pizza is the Margarita and loves cheese.
He also got us some special chilli oil which was made from Sicily's special red chillies and the oil was to die for. 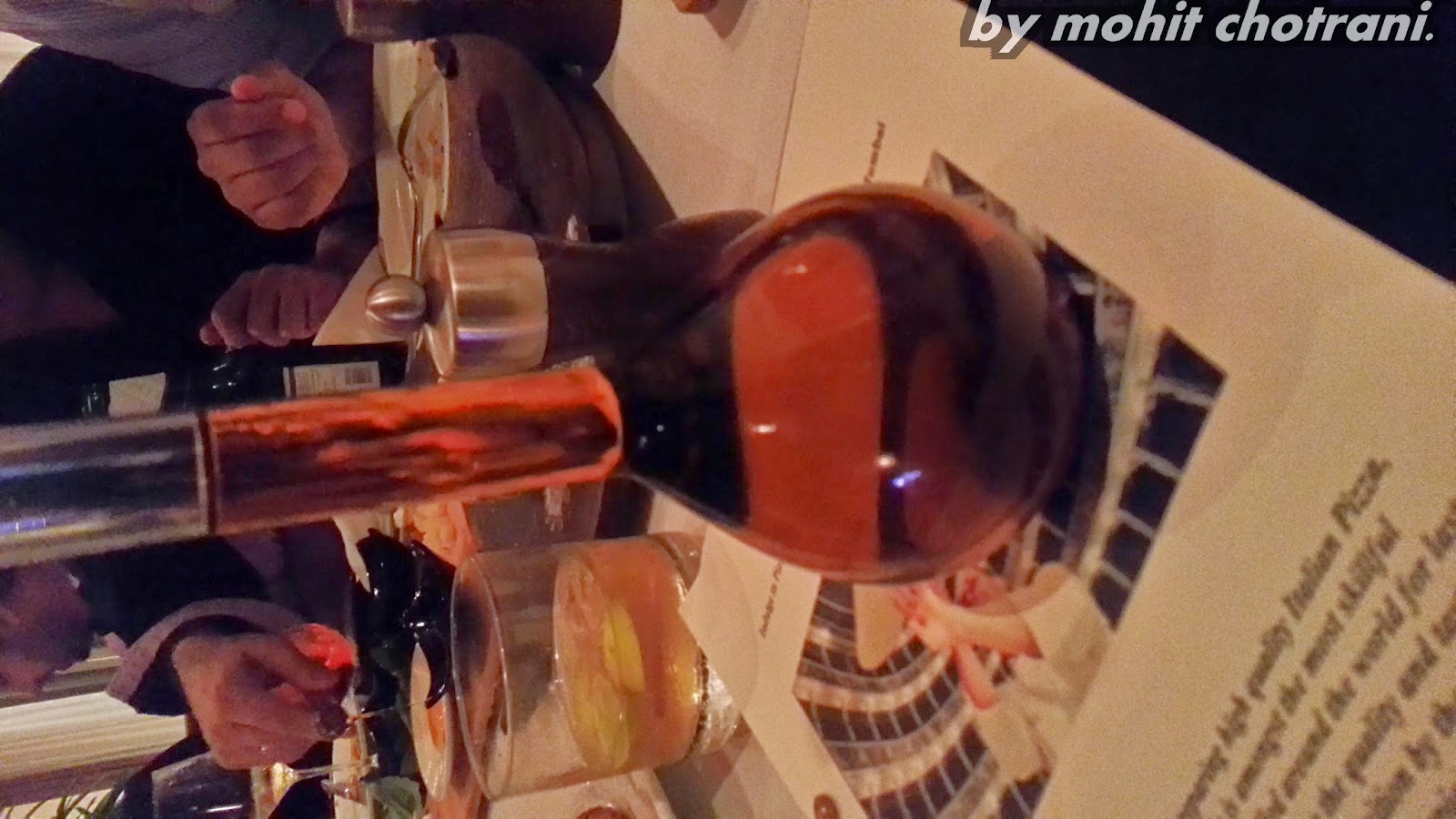 Soon the conversation got over and we were eagerly waiting for him to show us his talent in pizza acrobat for which he is know worldwide and travels doing shows all over the world.

The time arrived, he got on the floor with the dough for which he is known and then it all began.
At first it looked simple but as time was passing, I was shocked that a person can do this as well and that to with a simple pizza dough. For me what pizza dough was, just eating it with some toppings and cheese but this was out of the world. 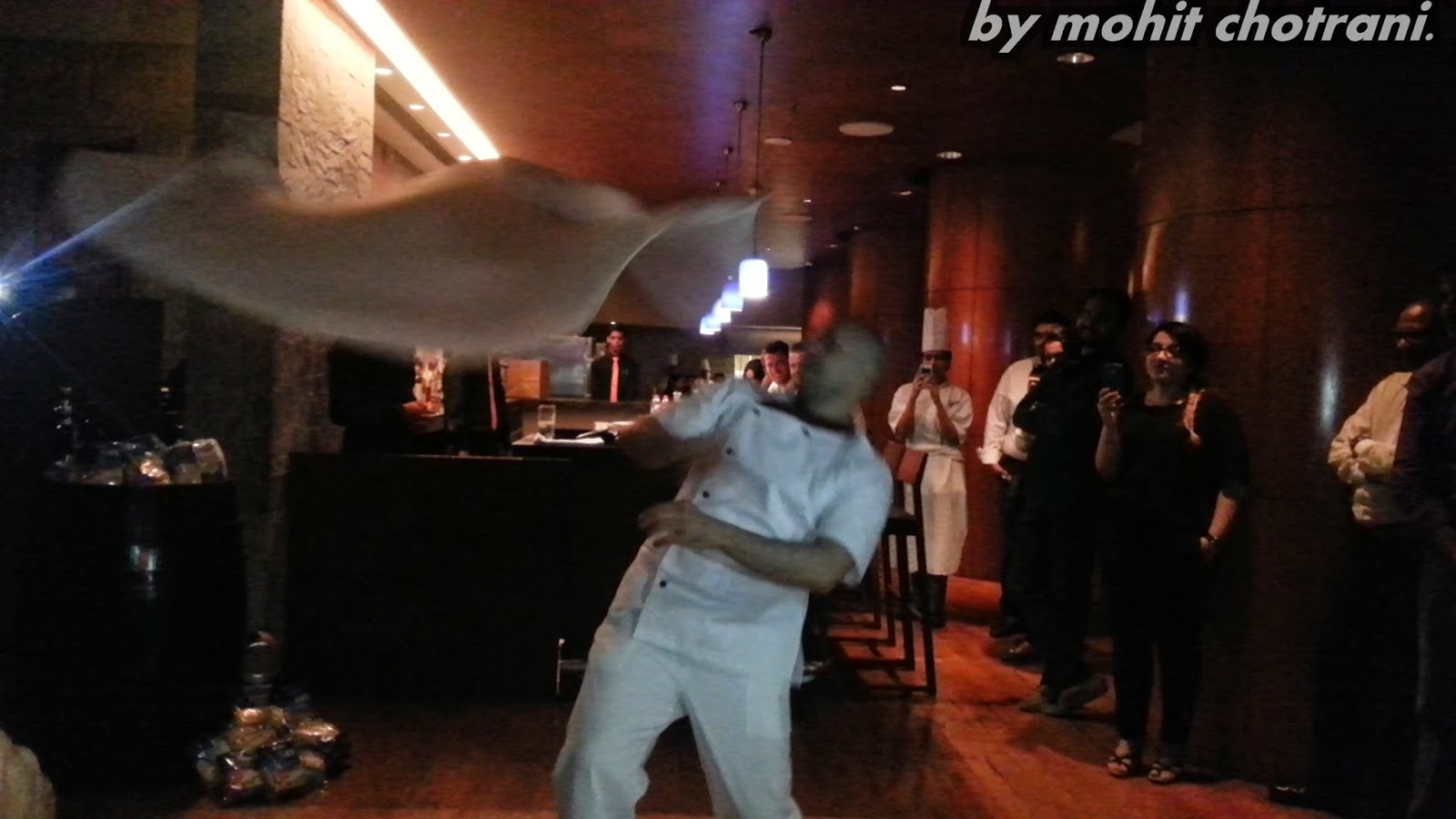 The show went on for like 15 mins or so and the whole restaurant had gathered to see the show and was astonished with what was going on and how Chef Pasqualino Barbasso was doing it. 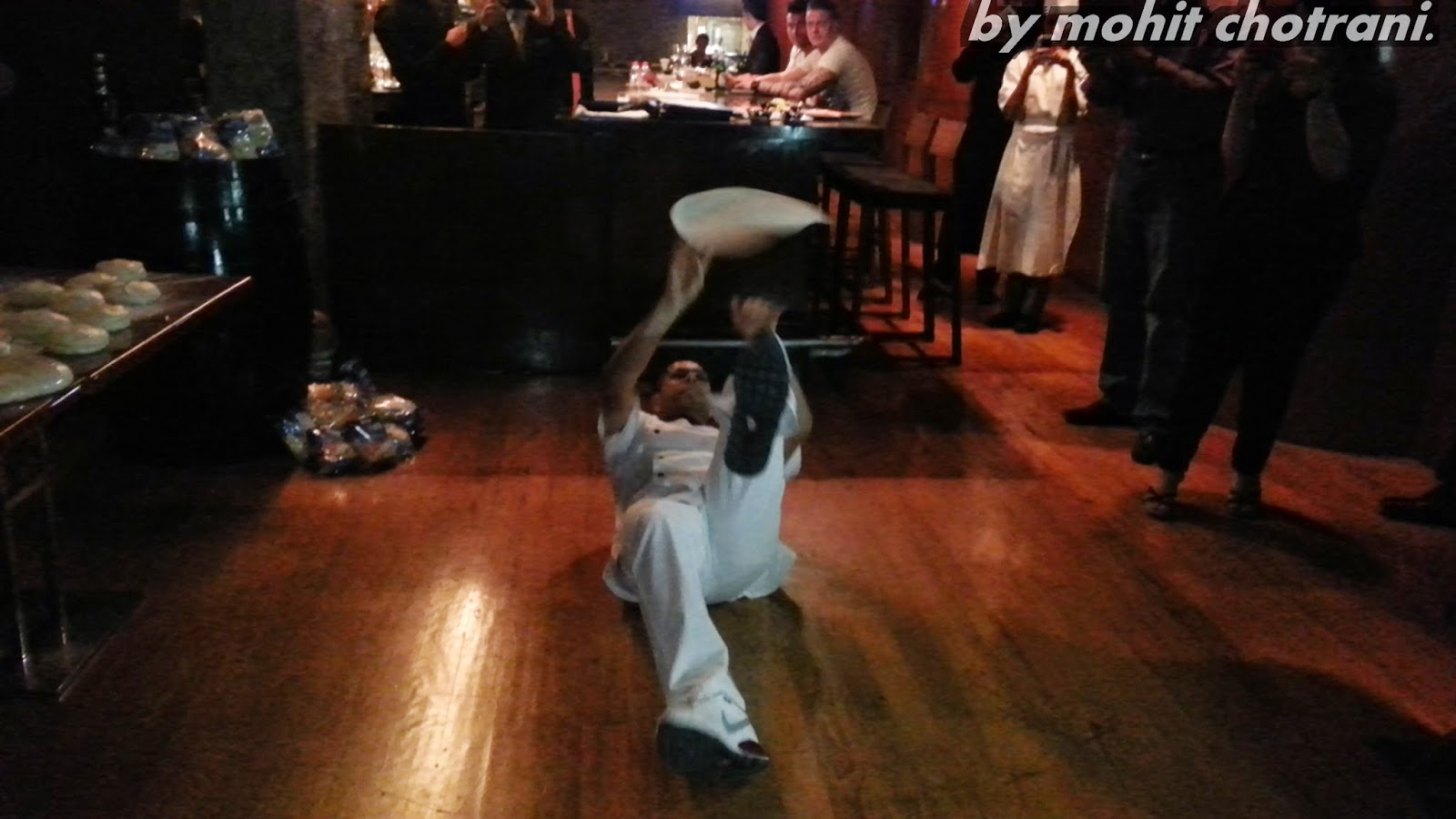 Once the show got over and all being still a bit shocked, went to the table and started talking about how can a person be so talented etc etc.
Then to the table comes the chef asking for the feedback on how the show was, and we all were falling short of words, and dint know what to say, just speechless.

By the way he spins the pizza dough, it was known that he can make 5 pizzas in 1 min and 10 seconds which is incredibly fast, I mean super fast.

He then headed back to the kitchen to make some of his special pizzas for us like the Seafood Pizza with Caviar, The Salmon and Asparagus Cream Pizza, The Salami and Mushroom Pizza, the Ham and Cheese which was rolled and was full of cheese. 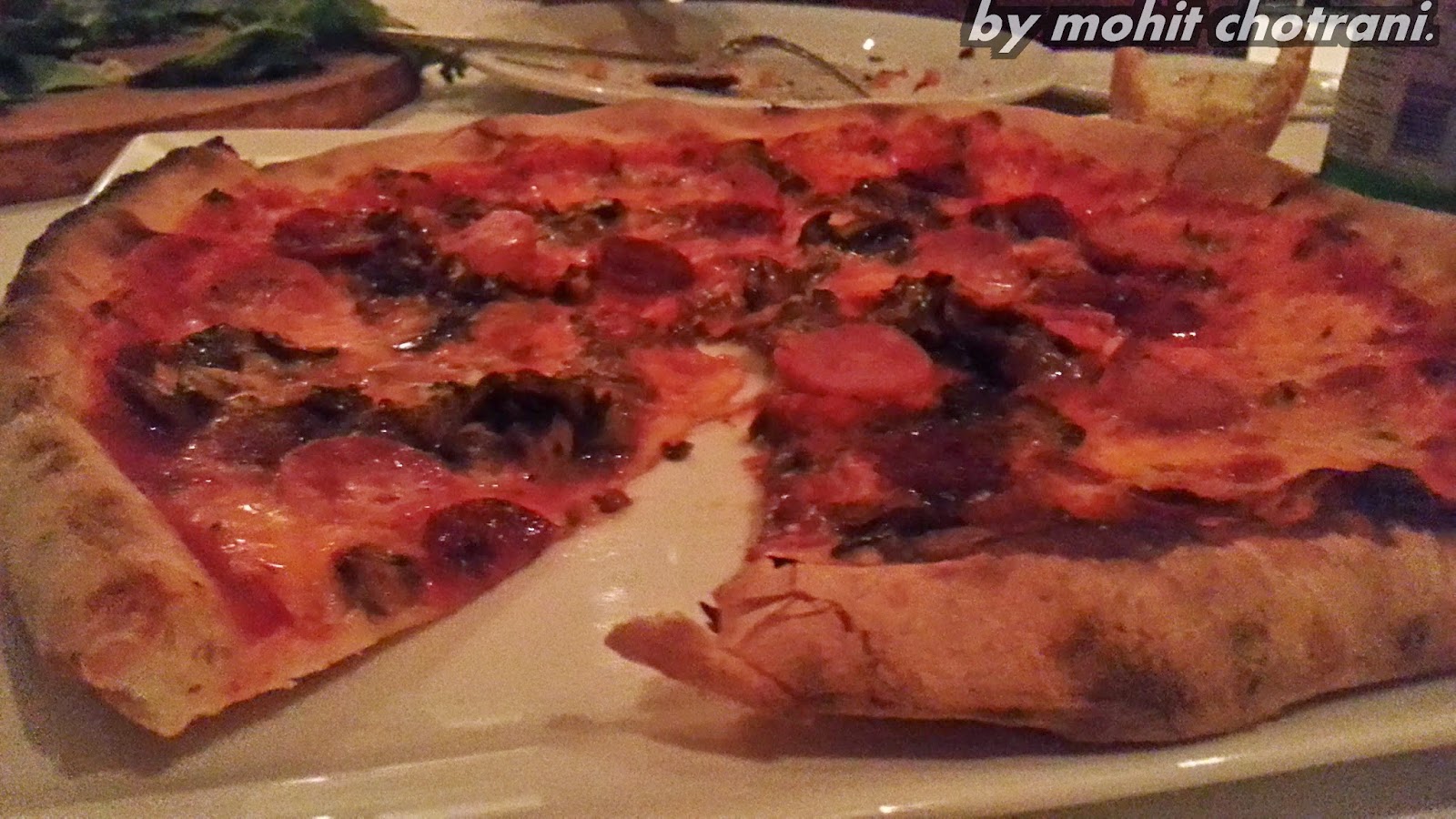 The for the vegetarian. there was the Veggie Pizza, the Artichoke Pizza and one of the Chefs new creation and a new addition to the menu - The Mezzo Mezzo Pizza which had the Indian twist to it. It consisted of palak paneer with soft pieces of the paneer. 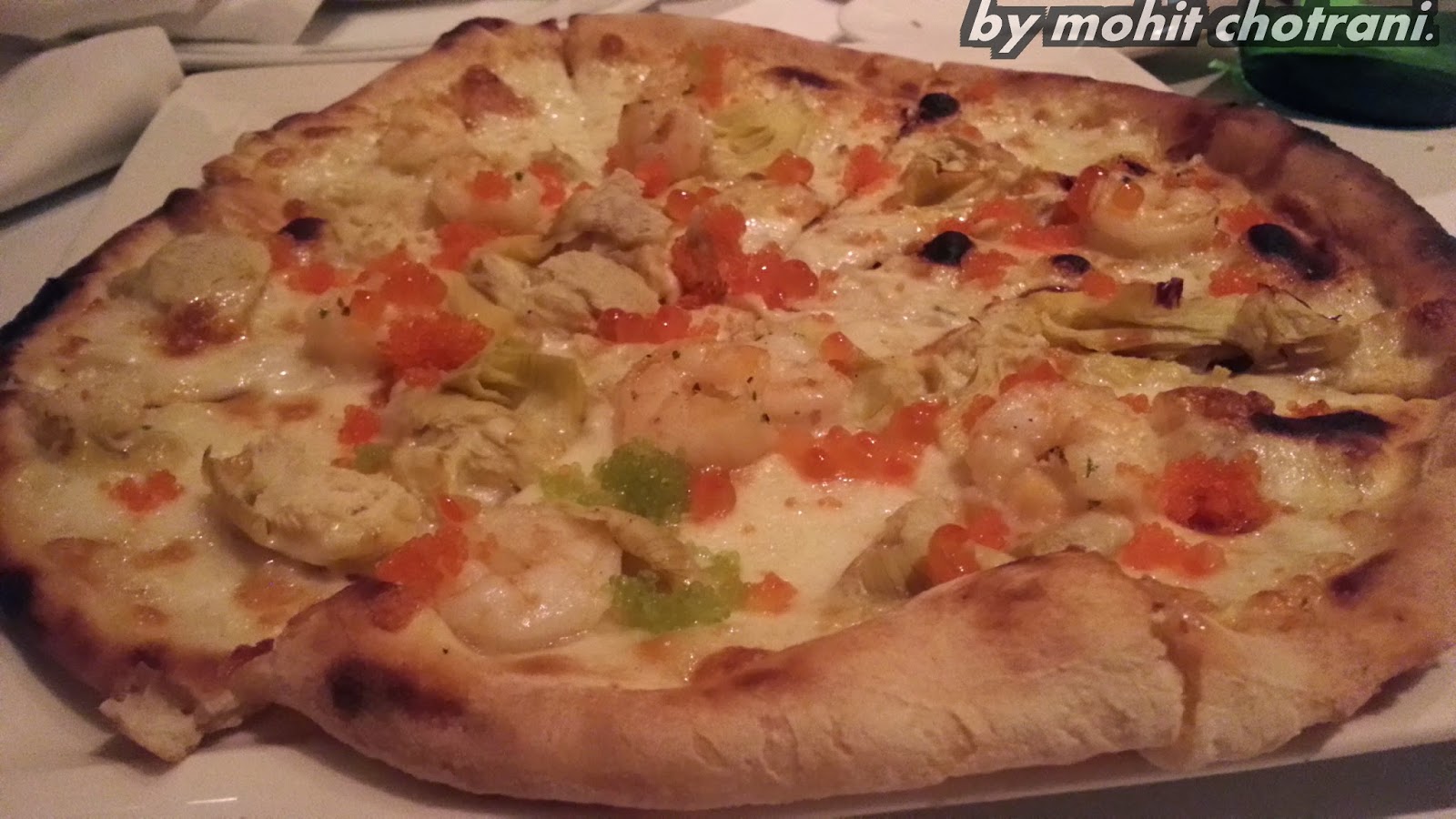 Taste wise the pizzas, were soo light and thin, like a person can finish the whole all by himself.
Personally not a fan of seafood, it was still amazing, the Seafood pizza which had Caviar, added an extra texture to the pizza, while having there were pops of the Caviar in the mouth which made it amazing. 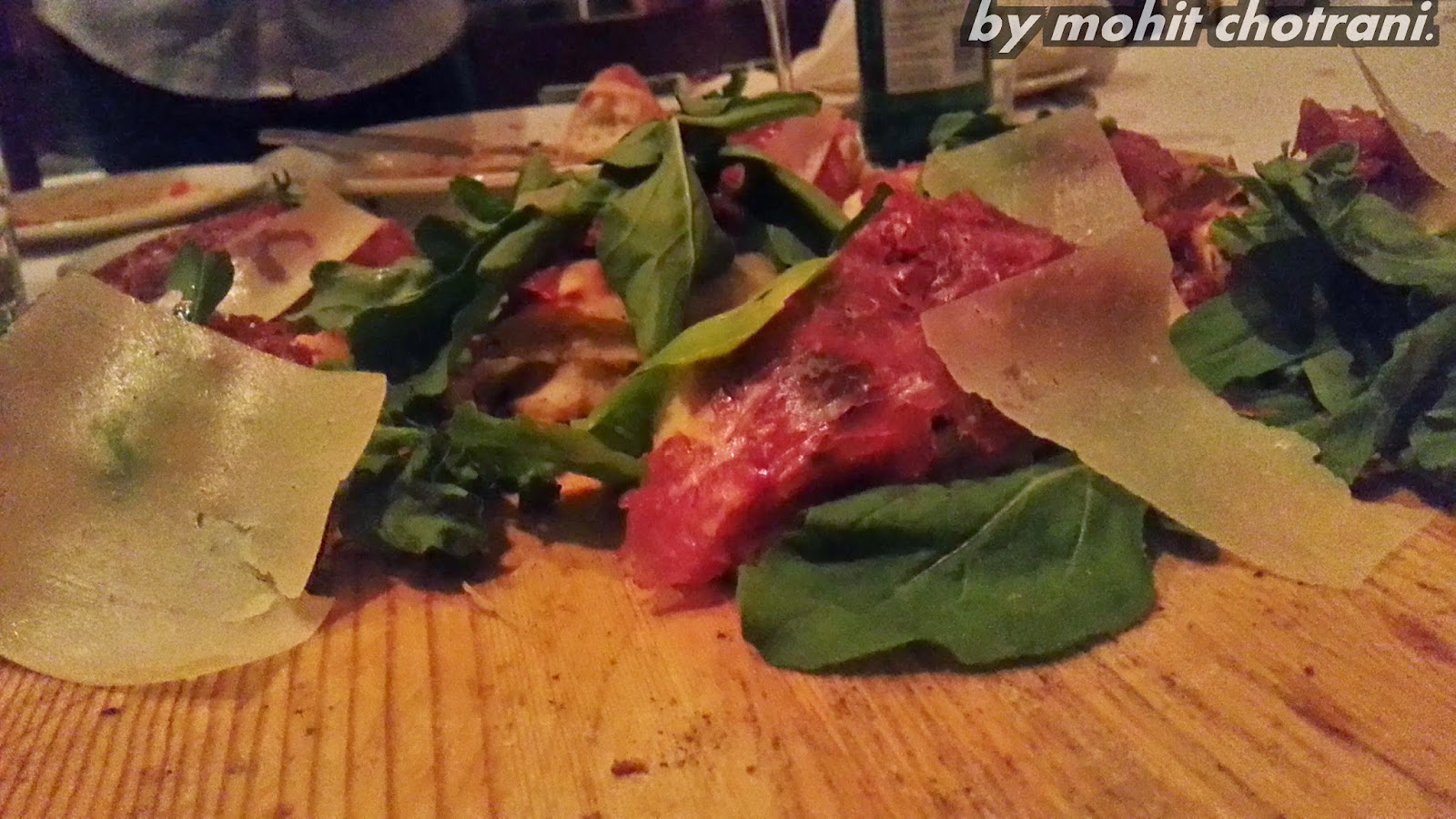 The Salami and the Mushroom Pizza was all the more better and full of flavors. Whereas the Ham and cheese was the best, it was full of cheese and was soft.

Lastly what I tried was the Mezzo Mezzo Pizza, which had the Indian touch, the palak paneer, honestly speaking, it was the best pizza with an Indian topping on it which I have ever had. 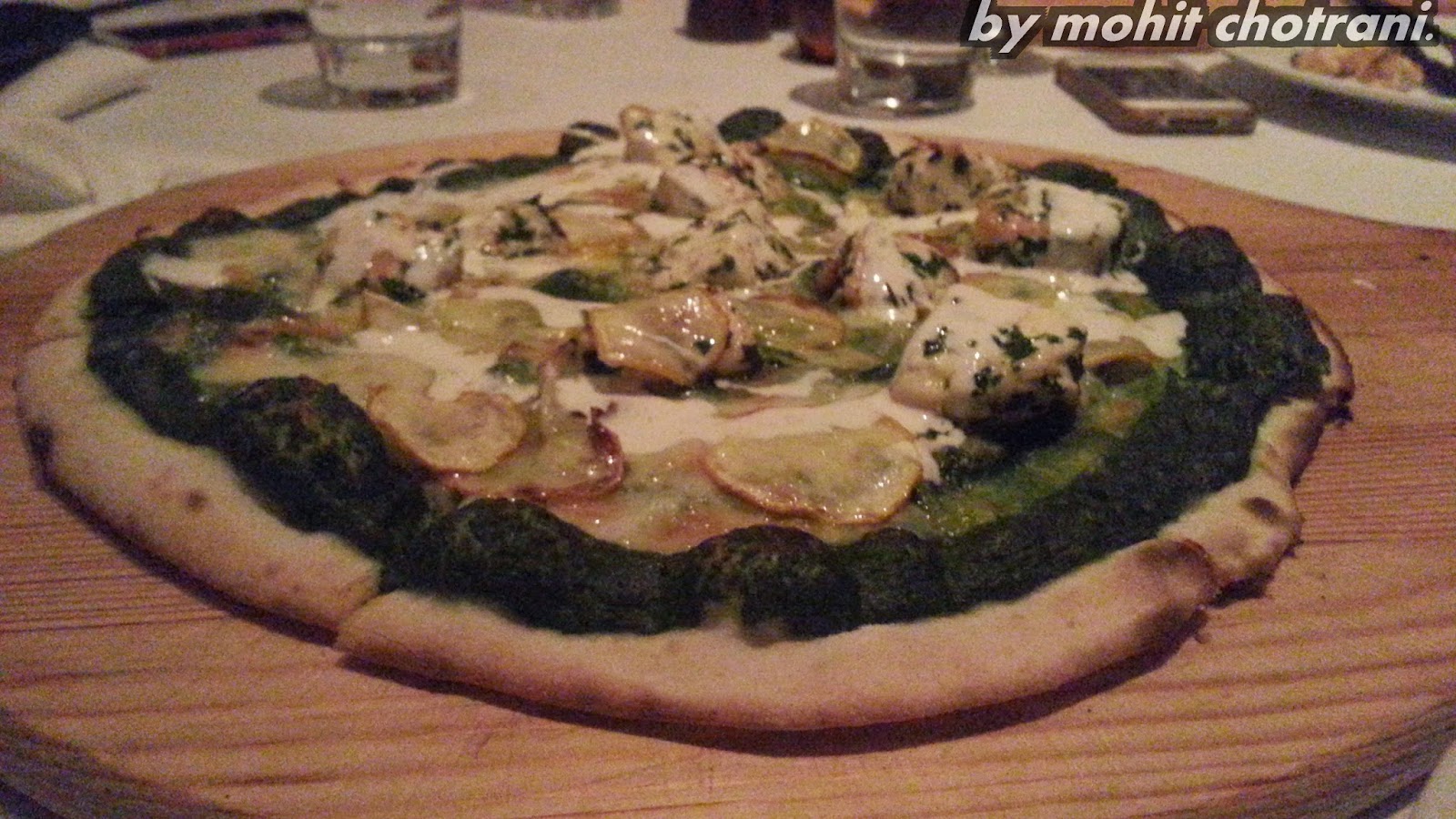 So we were all done with the amazing pizzas, and were full by then, buy then we all forgot that we still have dessert left, my all time favorite 'Tiramisu', I can have it all day and night.
This time the Italians favorite Tiramisu was much much better than what I had last time, it was soo light and was a healthier version, not soo sweet, just 'Perfecto' and spot on.
I must say that it is the best Tiramisu I have had in a very long time and in Bombay.

Now that everyone was done with the dessert, it was time for the group picture, a memory to cherish with ourselves.

I dint leave the place empty handed, I had the memories to cherish, the people I met and the friends i made and the lovely evening I spent with the people.

I would like to thank the Food Bloggers Association India for the invite, Chef Pasqualino Barbasso and J W Marriot for hosting the evening. 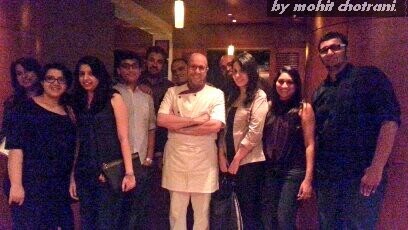 3. Freezing the Leftover Liquids/Stocks.Freezes wine in ice cube trays and store them in the freezer, ready to be pulled out one at a time and added to pan sauces and stews, saving you from having to open a whole bottle every time a recipe … 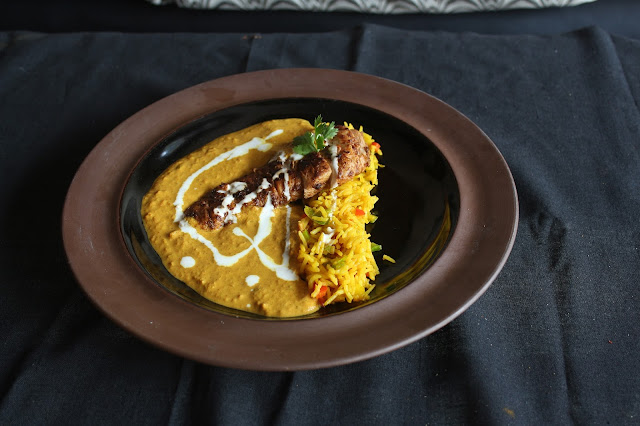